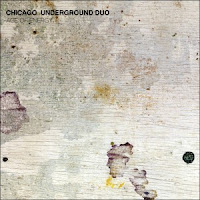 "Wind Sweeping Pines" is a twenty minute track on the Chicago Underground Duo's sixth album "Age of Energy" and the intensity and emotion that builds by the end of the track is just incredible. Cornetist and electronic sound sculptor Rob Mazurek's melody sails above the mix of acoustic drums and bubbling electronics. But, it's the journey to that point that deserves the most mention.

Through an electronic soundscape that is as organic sounding as it is electronically structured, tones and waves slowly build and blend mesmerizingly. Five minutes in, Chad Taylor's drums appear with a simple pattern that gives the pulsating electronics a human element. Things seem to break down a bit at the 12 minute mark and when the cornetist finally appears, it is as an effected ghostly wail, blending with the electronic tones. Only towards the very few last minutes do the acoustic instruments burst forth with the aforementioned ferocity.

Other tracks, like "It's Alright" is a thorny nest of ambient sound that creates a desolate and tense atmosphere below the cornet's lonely melody. "Age of Energy" is a percussive piece with the electronic oscillations coloring Taylor's free playing. Mazurek's soloing is focused and driving when he picks up about half way into the song. 'Castle in Your Heart' is a tender piece with Mazurek playing muted horn over the mbira. The most straight ahead song is 'Moon Debris', comprised of mostly drums and cornet, it blazes a bright and energetic path as it courses though the speakers.

The album is aptly titled, the duo captures the bits, bytes, fumes and fusions of our age with an expert blend of electronic sounds and acoustic instruments. Melodies and motifs are ephemeral, a constant flow of ideas and sound, grafting the organic and electric. A fitting soundtrack to our times.

The Chicago Underground Duo/Trio has been covered here in the past, see some of the other reviews:

I've always loved Chad Taylors work, and The Chicago Underground Quartet's self-titled album is one of my favorite albums. Thanks for posting! Have you heard Chad's work on Jeff Parker's newest cd "Bright Light in Winter"?

No, but I'd love to. Looking forward to hearing that one.