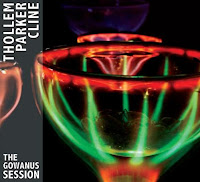 Avant pianist Thollem McDonas teams up with William Parker on bass and Nels Cline on guitar, and when the music starts, you think you're in for quite a harmful and damaging, and maybe even dangerous recording. Very few of the sounds these sorcerers conjure up from their instruments appear to be familiar, let alone how their interactions, which collide at various levels of volume.

On the second track, you are welcomed by some gentle piano playing, and lured into another strange universe, full of hammering piano chords, irregular stomping and groaning guitar sounds. A similar approach welcomes you into the third piece, with even riskier result, with especially Cline's distorted guitar sounds skittering over the canvas. The longest - fifteen minute - track is called "Lives" and is built around a repetitive piano phrase, very present in the foreground, supported by relaxed bass by Parker and in stark contrast to the absolute mad guitar sounds that are generated somewhere in the background. Towards the end of the track, the listener gets some rest and can let himself or herself be taken along gently rather than with force, but this is only temporary, because the short last track grabs you again by the neck and drags you into sonic mayhem again, but then again relinquishes its grip a bit and marches you forward - you can hear the footsteps - only then to end in absolute calm.

The titles of all the tracks form the sentence "There Are As Many Worlds In A Life As There Are Lives In the World".

A strange and mysterious album. One that sucks you up and takes you along, whether you want to or not. Not for the faint of heart.

I'm really pleaseed to see that you've had some tme to review recordings recently. Whilst I realise that the 'collective' was the only way for this marvellous blog to contine I do see your critical voice as the soul of the enterprise. Please keep writing reviews whenever you can. One day you may be rewarded by Wdada Leo Smith recording 'Lonely Woman' for you to review!!

Thanks! That would be a great day ... with soon a new version by Joe McPhee coming up.

True that, Anonymous. The whole collective is looking forward to seeing our spiritual master reviewing the way he did. Keep on keepin' on, Stef.

I had heard a lot of buzz about Thollem but am afraid this album proved decidedly underwhelming. I probably would have dropped the half-star from the review myself.

Thollem states that he aims to approach each album and performance as unique events, and he does seem to follow through with this...I highly recommend checking out his solo work, particularly Gone Beyond Reason To Find One, or his duo album with Scodanibbio (On Debussy's Piano And...), or Magimc with Stefano Giust and Edoardo Marraffa. There's also his bandcamp site with many live performances including with Pauline Oliveros and Susie Ibarra and more...