Guitar Week: In the Band

Today's post, the last in our guitar week series, is not a focus on the guitar as much as it is the celebration of two guitarists who are at ease participating in the shaping a group's sound as much as they are blazing their own unique trails. Today we feature bassist Ingebrigt Håker Flaten's quartet with guitarist Joe Morris and drummer Ches Smith's These Arches with Mary Halvorson. 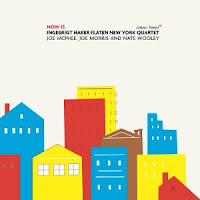 Ingebrigt Håker Flaten has already led under his own name an interesting quintet composed of renowned and young musicians (Dave Rempis, Frank Rosaly, the young and gifted guitarist Anders Hana to name a few) releasing two albums on Jazzland Recordings with the solid and eminent production of Bob Weston.

By the way I imagine that the responsibility of being the leader of such a stellar quartet as the one we have here featuring Joe McPhee on tenor saxophone, Joe Morris on guitar and Nate Wooley on trumpet is some kind of different. Especially if you consider that, according to the liner notes, there is only one written composition in the album and the rest of the music comes totally improvised. Who is going to tell for example to McPhee that the approach he may be following in a passage is even just slightly diverse from what you have in mind? Clearly, not me. It goes also without saying that being “the leader” in a more or less extended ensemble doesn’t mean to be the one dictating rules to impose his own instrument on the others.

This is a no piano and no drums quartet and many of the eight tracks of the album are largely built as bass/guitar duets that, working in a compact interplay, give to the brass section the chance to focus on lyricism. At the same time, even when trumpet and sax are phrasing synchronically with vigour, they rarely result as preponderant on the strings section. I like the versatility of Flaten’s style moving nimbly through a clean pizzicato and squawking notes as you may hear in the opening “Port” or in the dramatic bowing passages that gracefully link the two muted trumpets in the background of the acoustic guitar-driven “Times” (one of my favourites). “Pent” is the longest episode of the work and there is enough room for a bass solo setting a bluesy atmosphere that McPhee clearly enjoys (and that’s probably why Wooley answers him with bebop and Morris then thinks that some manouche can’t be wrong either). But the chemistry works well also when the musicians go for extended techniques moments as in “Knicks” or in frenzied interplays as in “Giants” (together with the title of another track -  “Rangers” - there’s an obvious reference to the three famous NY teams of basket, football and hockey).

I like the modular structure of “As if” where the bass/trumpet dialogue is at first hindered by the growing and wearing synchronic “singsonging” of the guitar and the saxophone. But roles in life as in music are bound to change and so, after a brief guitar/bass alliance, it comes the time of Morris’s guitar to be faced by the very same hammering chant of bass during his solo. Flaten seems to win because in the last minute Morris is again seduced by the hypnotic two notes phrase and re-joins him. But you know, life goes on and the bass player has already gone ahead for a new, just a bit evolved but always lullabying (a scale), litany together with the sax…

I can’t avoid thinking how it could have sounded this album with Paal Nilssen-Love behind all the other musicians sharing one time more the traditional rhythmic session with his long time pal on double bass. 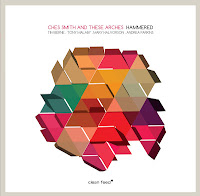 Two saxes: one alto and one tenor, and on the recording -- one in each ear.  Ches Smith just made my brain the keystone of his group, These Arches! This album, then, perhaps, is as neurologically enriching as it is musically enticing.

The move from quartet to quintet is solidifying for this band. Tim Berne on alto joins Tony Malaby on tenor, and the two carry us into various parallel and perpendicular worlds with dexterity and ease. Fresh and lean, these guys are panthers on the prowl. “Dead Battery,” in particular highlights their inventive contextualization.

Actually, These Arches as a group have several interesting contextualizing habits, many derived, of course, from the members’ high-level jazz improv expertise. Additionally, these five players prove to be confident in their well-chosen moments of rocking out. Last, but not least, These Arches seem especially facile with adventurous choices made in regard to the infusion of multi-cultural folk styles. For example (again on “Dead Battery”), Mary Halvorson (guitar and bass lines) quotes from The Everly Brothers’ “Let It Be Me,” (itself a re-worked French tune). Almost immediately, she injects a subtle Middle Eastern flavor into the lick. The band responds with layering that texturizes the hell out of the familiar riff, which is quite satisfying. The title track, “Hammered,” is also a good reflection of the band’s strength at melding various rock, folk/ethnic and jazz styles into something not only greater than the sum of parts, but something parting into a summary of something greater.

Andrea Parkins on accordion and electronics takes an interesting position in the band, providing a level of intense, yet restrained, subtlety. And Mr. Smith, on drums and percussion, takes care not to dominate, driving with an egalitarian ease and a lot of sound play.

Beware, though. This band also takes the stance of a big tease, brazenly daring you to come back for more. For example, round about 5:40 on “This Might Fade Out,” Ches Smith lays into a phat, funky rock groove that evaporates almost instantaneously within 20 seconds. Ooooh! Why’d you do that to me? How did I end up in this worm hole? Oh, well, it doesn’t matter because already I am somewhere else, feeling like a campy TV detective driving a 70’s-era Camaro, screeching to sudden stops, spinning into smoky half circles, soaring through the air off rising bridge plates….and, well, yeah!

So, you gotta get “Hammered.” If for no other reason than to wave the CD case in front of your best friend’s face and make that irresistible joke.