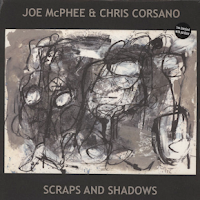 In an after-show interview with Rainer Kern, the organizer of the nice annual Enjoy Jazz festival in South Western Germany, Peter Brötzmann answered Kern’s wish to invite him again for future festivals with the morbid but brutally true statement: “Yes, do that, but you gotta be quick, we die like flies”. Brötzmann was under the influence of John Tchicai’s death who passed away the week before, which was why the usually hardly sentimental Brötzmann dedicated the concert to him.

Joe McPhee is even a bit older than Brötzmann and he knows what the German saxophonist was talking about. He knows that if you want to celebrate people or if you want to salute them for their lifetime achievement you have to make things happen as soon as possible.

Scraps and Shadows is dedicated to seven great and influencial people for McPhee and Chris Corsano but two of the honored ones have already gone. Still, there are five dedicatees left to receive the tribute that McPhee and Corsano are more than willing to pay.

Scraps And Shadows is Joe McPhee’s and Chris Corsano’s sophomore album to Under A Double Moon, which presented McPhee mostly on alto saxophone, while this one here features him largely on tenor but also on soprano and pocket trumpet. The album was recorded live in Milwaukee in 2011 and displays seven pieces, from the tumescent “For Fred Anderson” or the tender soprano ballad "For Adrienne P." (a local bartender and artist) to the raging-full-on "For Han Bennink" in which Corsano imitates Bennink’s drum style. In general McPhee’s and Corsano’s approach is to include the style of the dedicatees into their pieces, for example Native American chants in “For Jim Pepper”, overblown energetic phrases in “For Paul Flaherty” or implied New Orleans blues in “For Kidd Jordan” - if the piece is dedicated to musicians. With its moanful sound “For Muhammad Ali” rather refers to a certain attitude or to a certain time, namely the 1960s with its racial tensions and violent conflicts.

Like their first collaboration the charm of this album lies in the clash of Corsano’s boisterous  yet subtle art rock drumming (he has worked with Björk, Thurston Moore or Massimo Pupillo) and McPhee's “pure R&B honk and fiery gusts of sheer overblown freedom” as Thurston Moore once put it.

Scraps and Shadows is available on vinyl only but the LP includes a free download.

Can be purchased from instantjazz.com

You can watch them in a performance from 2010 here: