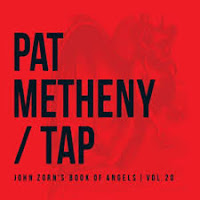 One thing you have to say for Pat Metheny: he will keep you guessing.  For every record he releases of questionable new-agey smooth jazz, you’ll find a Song X, his astonishing tribute to (and collaboration with) Ornette Coleman.  For every commercially safe fusion-lite release, he’ll turn around and produce something like the head-scratcher Zero Tolerance for Silence, or The Sign of 4.  So it really shouldn’t be that surprising that he’s now made a contribution to John Zorn’s ongoing Masada, Book Two project.  Whatever one thinks of Metheny’s overall body of work, one has to acknowledge his relentless willingness to take risks and steer clear of the most obvious choices, even if it occasionally involves alienating a significant percentage of the fans who want him to stick with the schlock.

Okay, with all that out of the way: let’s get to the record at hand.  Does it work?  For the most part, yes.  It’s a series of six one-offs, with Metheny recording each track in his home studio during his spare time in between tours.  Metheny’s longtime associate Antonio Sanchez was added in to record the drum parts separately, but this is really a Metheny solo record, albeit with a lot of multi-tracking going on, since he plays what seems like nine or ten different instruments (I eventually stopped keeping count)—and a lot of electronics.  As a result of the way the recordings were assembled, there’s admittedly a bit of a distracting gee-whiz quality to a few of the tracks, as one tries to figure out everything that’s going on (e.g. how many different guitars is he playing at the end of the fourth track, “Sariel”?).  And unfortunately, Metheny just can’t seem to resist bringing in that godforsaken guitar synthesizer that he seems way too fond of (on the third track, “Tharsis”), and which is best enjoyed in small doses, to put it mildly.

But once we get past some of the technological artifices, it becomes apparent that Metheny’s appreciation for Zorn’s work is truly genuine, and that there’s a lot of heartfelt dedication to the music on these tracks.  Sure, some of it verges on sentimentality, especially on the fifth track, “Phanuel,” which features Metheny’s acoustic guitar.  But even there, Metheny’s lyricism serves to highlight the beauty of Zorn’s composition.  Metheny’s also loyal to Zorn’s idiosyncratic stylistic sensibility, as well, as there’s just enough off-the-wall stuff on each track to keep things interesting, be it the strange and disconcerting background noises on “Phanuel,” the abrupt and disjointed ending to “Sariel,” or the brief shout of Metheny’s daughter, Willow, at the close of the album.  And for those who appreciate Metheny’s talent as a guitarist, there’s some very strong guitar work on display: take for instance the spirited odd-meter opening track, “Mastema,” where Metheny engages in a seriously fuzzed-out guitar assault toward the end of the cut.  Even the piano work Metheny provides on the last track, “Hurmiz,” is pretty decent, with some spry drumming from Sanchez complementing Metheny to good effect.

No, it’s not a classic, and it probably won’t end up ranking with Metheny’s best work (or making him a featured artist on this blog, for that matter).  But on the whole, his sincerity and respect for Zorn’s music do come through convincingly, and at the very least this should do enough to keep everyone wondering what Metheny might try to tackle next.