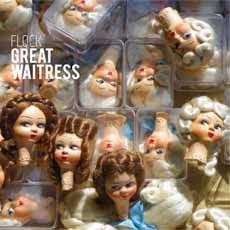 “Rite” eases into existence so gently, you’re barely aware it has a beginning. It sort of covertly manifests itself—suddenly, there’s  a great deal of activity, and it’s not so clear just when the transition from “nothing” to “something” took place. This is how we come into the first long track on Flock, Great Waitress’ follow-up to their 2011 debut, Lucid. For the next thirty-odd minutes, we are confronted with the unusual trio of Magda Mayas’ formidable extended/prepared piano, Laura Altman’s clarinet, and Monica Brooks’ accordion.

Flock is in keeping with Stef’s coinage from his Lucid review: “silenscape. ” Great Waitress is clearly aligned with the temperament and approach associated with labels like Creative Sources, Another Timbre, Edition Wandelweiser, etc. Why we associate these types of music so strongly with silence is a multivalent question. Surely, some do feature a great deal of silence; but others, like Flock, are actually quite “noisy.” John Cage’s fabled trip into the anechoic chamber taught us that no silence is absolute, and as creatures that are never free of immersion in sound, our notion of “silence” is more complicated and nuanced than the mere absence of sound.

Here, it may have something to do with an ambiguity of gesture, the act that seems to “say something.” Throughout Flock, musical gesture is often obscured, thwarting the idea of improvisation as a conversation. There’s a sense in which a track like “Rite” isn’t assertive in the way we expect, that the lines of communication between musicians can’t be made explicit to the listener. Our ears strain for the causal relationships in music: “here I am performing a discrete and intentional action, and here is the resulting sound.” An album like Flock throws cause and effect into question.

What is experienced, then, is a move from discrete to discreet: a shift from a distinct, discontinuous quantity of sounds to the considered production of a sustained quality of sound. What I feel when listening to Flock is a function of this continually refined and redefined character of sound. It is not patterns or structures that deliver me over a clearly-plotted path from one point to another, but a vague sense of movement that rafts me through a hazy, unbounded environment. Silence is evoked by the very delicate, ephemeral state of the performance, one the musicians work carefully and diligently to sustain (or better yet—not to disturb). At any moment this fragile state—this audible silence—could be shattered or dissipated by the slightest disruption (or the wrong kind of gesture). In this sense, Stef hit the nail on the head: “your personal volume and sound could harm what you hear.”
A quick note on the accordion: Brooks’ contribution is unusual—and ingenious—in that people don’t often capitalize on the accordion’s ability to create drones. Throughout, Brooks works by sustaining single notes or chords rather than creating unbroken chains of rapid melody. The result is rather orchestral—there’s a complex depth that calls to mind a large string section, and the upper reaches of the accordion’s timbre meld fluidly into Altman’s tempered clarinet.

In the end, Flock creates an uncanny listening experience. The results don’t sound random or without some “greater” governing order or logic, but they also can’t be easily pinned to human agency. For this reason, it’s both exciting and unsettling: we know that these three musicians created what we hear, that it is a direct product of their considerable talent, and yet we are haunted by a sense that there’s some other element at work, something we won’t ever be able to unmask. This isn’t to suggest some mystical or divine hand was lent to Great Waitress—it is solely the work of three impressive musicians—only that the result of their collaboration transcends our ability as listeners to fully grasp how everything comes together just so.  And so it is.