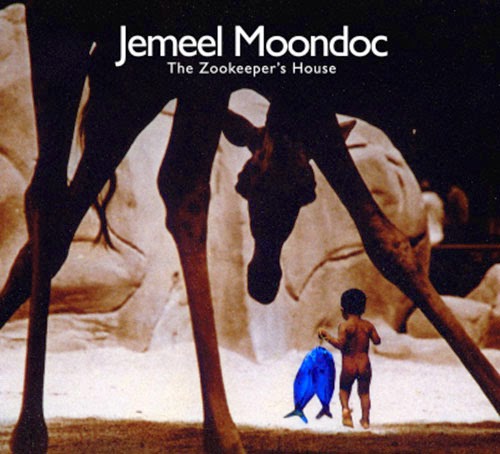 It’s been thirteen years since Jemeel Moondoc released what I consider to be one of the great classic free jazz recordings of recent times, Revolt of the Negro Lawn Jockeys, on the Eremite label – which is now criminally out of print.  To me, it summed up all that is great about Moondoc’s in-and-out playing style as well as the scope of his visionary creative spirit.  It’s usually in the stack of 15 or so CDs I keep in the car, a nearly permanent fixture among the constantly changing flavors-of-the-month.  Moondoc’s new album, The Zookeeper’s House, is at least the equal to that masterwork while building upon its framework: a post-modern free jazz musical exploration that continually builds upon its American free jazz and hard bop roots.

It opens with a spacious and solemn rhythm section - pianist Matthew Shipp, bassist Hillard Greene, and drummer Newman Taylor Baker – building the moody foreground before Moondoc enters, leaping hopscotch lines around them.  This inspires the trio to begin swirling around each other, creating a perfect storm of time and space.  The rhythm section accelerates suddenly, becoming more emphatic and mechanical.  Moondoc’s response is to throw sound splatters on them.  Soon the other players follow suit and kick up a food fight of denser proportions.  Shipp is especially good here, allowing enough space for everyone to fully participate, yet holding the framework of the overall piece together.  Brilliant.

This album’s tracks mostly consist of a head/solo/solo/solo/head structure, as on the next few songs, beginning with “Little Blue Elvira.”  The late Roy Campbell Jr. takes to the skies in his immediately identifiable, joyful, golden tone, which also carries hints of a more somber air than is usual.  (Or is it just my imagination hearing things so close to his passing?)  Moondoc follows with a swinging melodic response that also bursts into spirited flights away from standard notation before diving right back into the swing of things.  Trombonist Steve Swell continues the momentum in much the same vein, combining free skronk with swinging melodic balance.

Alice Coltrane’s “Ptah, The El Daoud,” the only non-Moondoc penned track here, spins its eastern modal web beautifully into the program with Moondoc doing a fine job of making Pharoah’s domain his own.  Next, Moondoc plays in full Trane mode while Shipp rhythmically jabs dissonant chords underneath in the aptly titled “One for Monk and Trane.” Shortly into the track,  Moondoc switches over to Dolphy territory with non-pitch bleats and runs.  Shipp’s chords and off-kilter ivory dancing are completely fascinating throughout.  His solo is a barrage of smart, single-note, right-hand melodic runs accompanied by his constantly surprising left-hand jabs.  It’s probably lazy journalism to state that Shipp is the most inventive pianist of his generation; but it’s also true.  Also, a celebratory Greene summons the spirit of Jimmy Garrison during a particularly sublime solo.

The closing track, “For the Love of Cindy,” opens with late-night melancholy from Moondoc, beautifully accompanied by Greene and Baker.  Green swings on the bass neck like a drunken sailor holding the mast during a quiet storm on this pensive piece.  Baker creates a meditative space with just his cymbals and silence, completely possessed by intuitive genius.  It is maddeningly lovely, as Cindys tend to be.  (I married one!)  It’s a sweet and wistful end to an album that isn’t as straightforward as it seems.  The waters are deep underneath that drunken sailor.  The album really is more than the sum of its parts; and it may even replace my CD of Revolt of the Negro Lawn Jockeys in the car.  It would be a terrible shame to see this disc pass quietly by unnoticed.  Consumer advice: invest in a future classic!