Thurston Moore and Mats Gustafsson Round Up: Day 1

Thurston Moore and Mats Gustafsson have a longstanding musical relationship, captured across numerous releases with a variety of projects and personnel. Over the next two days we'll look at recent offerings which find the pair together in action.

The earliest available recorded documentation of Moore and Gustafsson playing together can be traced back to an improvised 1999 session at Sonic Youth's Echo Canyon Studio, 'New York - Ystad' (featuring a quartet of Moore and Gustafsson, with SY's Lee Ranaldo and Steve Shelley) formed part of a box set (which included a 7" of Gustafsson with Sonic Youth from Kongsberg Jazz Festival in 2000, alongside signed reeds from 150 different Gustafsson gigs, amongst other objects) released on Gustafsson's and Thomas Millroth's Olof Bright label to commemorate a week of concerts in Ystad, Sweden 2000 which featured Sonic Youth. From that week the first Hidros 3 recordings were made (credited to Mats Gustafsson/Sonic Youth With Friends) which were eventually released in by Smalltown Supersound in 2004.

Moore and Gustafsson, alongside then Sonic Youth member Jim O'Rourke, formed Diskaholics Anonymous Trio, a group who exclusively booked concerts in places which had record shops they wanted/needed to visit. Original Silence, a sextet which sees the Diskaholic Trio augmented by ex-Zu bassist Massimo Pupillo, The Ex's Terrie Ex and Paal Nilssen-Love, has released two LPs of blistering free rock to date. A live set featuring the pair with Chris Corsano and Bill Nace (Vampire Belt) was released jointly on Moore's Ecstatic Peace and Nace's Open Mouth labels. Gustafsson also appeared, with Merzbow, alongside Sonic Youth at their Roskilde Festival performance in 2005, which saw the light as the eighth instalment of the Sonic Youth Recordings series. Moore has guested with The Thing on several occasions, and both have reprised their association with Merzbow (and Balázs Pándi) on the sequel to 2013's 'Cuts' (more on both tomorrow!). 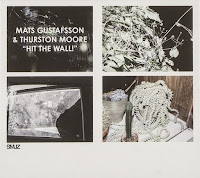 Originally scheduled for release in 2010, the pair's 'diskaholic' tendency is referenced in the title to this duo set, recorded in concert in Philadelphia in 2009, the same tour which yielded 2012's 'Play Some Fucking Stooges' single-sided LP. 'Hit the Wall!' is in reference to the first port of call when entering a record shop, the wall (usually behind or adjacent to the counter) where all "the rare shit" usually is, to quote Gustafsson. Of the two tracks on the disc, the first takes its name from the album title,'Hit the Wall! (First)', the second 'Buying Saturns on the Street!' is in reference to their shared love of Sun Ra sides.

The opening exchanges are comparatively restrained, Moore scratching away at his guitar with a file whilst Gustafsson flecks overblown rasps in his direction, a bristling interchange in serrated tongues. In a moment of calm the distant rumble of Gustafsson's electronics begin to encroach, then comes the noise, Moore wringing prismatic colours from distorted barbs and lashing feedback, whilst the Swede controls the contours of a grumbling rockslide of malevolent circuitry. Somewhere Brötzmann is shaking his head ruefully. When the deluge finally subsides, the quality of the sounds are no less gnarled, but they are deployed with an almost meditative dialectic deftness for the remainder of the 48 minute title track. 'Buying Saturns on the Street' is the duo at their most compressed, 15 minutes which quickly escalates to the kind of feral sonic pugilism which dominated their OTOroku offering 'Vi Är Alla Guds Slavar'. 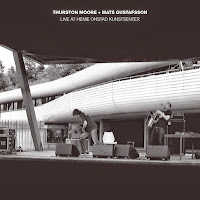 Released on Prisma Records, a label "dedicated to releasing music performed and recorded at the Henie Onstad Kunstsenter, Høvikodden, Norway," 'Live at…' documents an outdoor set from 2013. The dust jacket has photos of the crowd, perched on the steps of the amphitheatre conversing and sat back on the grassy slope, drinks and sandwiches in hand, enjoying a sunny June day. "Bring your own blanket, bathing trunks and towels and spend the day" the original concert listing read, "food from Bølgen&Moi and a dip in the sea." So often associated with transgressive imagery, this is the Free Noise equivalent of 'Jazz On A Summer's Day', albeit rendered in monochrome.

"This one fades in slowly," John Peel was given to say before bringing the fader up on the next cut from his playlist. No such thing happens here. Theres no tentative 'feeling one another out' looking for cohesion, no polite musical door holding to ensure everyone is in the same room. There is just noise. Instant, pummelling, glorious noise. Gustafsson is straight outta the gates on electronics, Moore headlong into blistering squall, both men out for blood. First off they work the body, softening you up, then the ferocity escalates, the results increasingly savage and sanguine. When the reeds finally enter they cry out in pained yelps, anguished bleating and lupine howls. Things don't back down on the flip either. Any sense that proceedings are more mannered or domesticated is most likely attributable to nerve endings having been cauterised, blows continue to rain down but nothing is felt but the heady displaced euphoria of adrenaline.

Thats my kinda day at the beach.

I'm guessing tomorrow we'll see the newish Cuts album with Merzbow and Pándi (in that case, of course, Moore is a new addition). I think that's a great colab, though, as someone else pointed out, it's unfortunate that Gustafsson mostly sticks to electronics on it rather than sax.

thanks for the information, stunning colab indeed