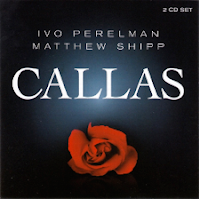 Yes, that’s right, the soprano Maria Callas, the archetypal diva both onstage and off, who possessed a voice and dramatic presence which held audiences spellbound. Her roles tended to be of wronged women, though it could be said that there’s rarely any other kind of woman in Italian opera (with the exception of the Macbeths, there’s little of interest when the course of true love runs smooth). In many ways, she belongs to a past era – perhaps even a Golden Age of opera production – but her performances remain inspirational.

Apart from the incomparable Porgy and Bess, the only other occasions I can recall on which jazz and opera have met are Dave Burrell’s La Vie De Bohême (BYG, 1970) – an album I’ve never really got – Louis Sclavis’ Les Violences De Rameau (ECM, 1996) -- infectious rhythms from the French baroque – and Joe Lovano’s Viva Caruso (Blue Note, 2002) – Lovano’s glowing tenor in suitably plush settings. Except, Callas is not quite the meeting one might expect. Along with other recent albums, there’s an oblique relationship between the music and what inspired it, see: the Matthew Shipp Trio’s To Duke, Raphael Rogiński’s Plays John Coltrane snd Langston Hughes. African Mystic Music, and Soko Steidle’s Played Ellington (Jazzwerkstatt, 2015). To appreciate why, you need to understand the background.

During 2014, Perelman suffered difficulties that were traced to his use of a double-embouchure to reach the high registers, resulting in a physiological response similar to what happens when singing. After speaking to opera singers, he took voice and breathing lessons, and started to heal. “Now I breathe as if I were a singer; I think as if I am a singer.” During this process, Perelman listened to opera, eventually to Maria Callas exclusively, and began playing along to her recordings. This reached a point where he was playing her arias on his saxophone “note for note, inflection for inflection, subtlety for subtlety”. He then went into the studio with Mathew Shipp (piano) and they recorded in the usual way, without any prior discussion.

As with Tenorhood (reviewed yesterday) the tracks were named ex post facto, Perelman identifying correspondences with particular roles played by Callas based on the psychology of her portrayals and their “emotional arc”, even though none of the music from the operas was used and he admits to being unfamiliar with their plots. There are a multitude of ways in which he might have made these connections however, so you don’t need to listen with Kobbe’s Complete Opera Book balanced on your knees. These pieces are not mini-operas but a distillation of the kinds of feelings that make them up.

There’s no doubt that on this album Maria Callas has inspired a heightened sensitivity to things that are often overlooked, providing a springboard for some truly remarkable playing. It’s a masterclass in the control of dynamics and subtle shading. Often, the music is sotto voce, full of powerful restraint and finely graded emotions. There are no tunes as such, but the song-like quality identified by Perelman stands out – tiny melodic seeds that flower into undulating melodies, languorous phrasing, and carefully judged crescendos. ‘Tosca ‘and ‘Leonora’ are particularly lovely.

Uncannily, Shipp has caught the mood exactly and the album reveals another side to his playing (I’ve lost count). He has an exquisite touch, on occasions so refined that he gives a sense of not just foreground and background, but of planes between.

It’s a varied recital: ’Rosina’ and ‘Aleeste’ explore the contrapuntal exchanges which have preoccupied Perelman of late; ‘Louise’ is full of seething emotions interspersed with more reflective asides; and ‘Abigaille’ is thirty eight seconds of Perelman and Shipp chasing their own tails. Occasionally, Perelman wanders into the altissimo register and his phrases become more abbreviated, but he never loses the dramatic thread.

The album ends with ‘Giulia’: muscular tenor supported by chiming chords from Shipp. They take on a darker hue as Perelman falters, his phrases begin to dissolve and then fade out slowly into silence, as if receding into the distance.

To conclude this three day focus: in his contribution to the liner notes to Counterpoint, Joe Morris claims that Perelman “is one of the greatest improvising saxophonists of our time”. I agree, these three albums – together with the other releases of the past few years – confirm that improvisation can cater for a range of sensibilities and that Perelman and his colleagues have undertaken an exploration of considerable importance, resulting in music-making of the highest quality. Perelman’s insistence on complete improvisation with no pre-planning and search for new means of expression through increasingly diverse projects, suggest that he concurs with Don Cherry’s dictum: “style is the death of creativity”. I recommend you join them in their journey.
Paul on Sunday, October 11, 2015
Share

A brilliant conclusion of this three-day-bonanza, Colin. I just bought "Callas" and with the help of this review I am looking forward to listening to it even deeper now. All in all the three days about Perelman give an insightful look into an artistic life and what I liked the most were the different perspectives the reviews offer (history of the tenor, comparison to opera, counterpoint). Reviews like these are the reasons why this website has achieved a very good reputation in the world of improvised music in the meantime (as Rodrigo Amado and Michael Zerang have told me recently). The "Bravissimo" at the end of the review applies for you as well.