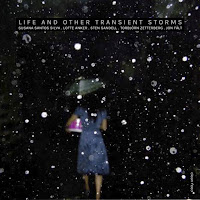 Life and Other Transient Storms is kind of a dream team—hopefully, the first recorded meeting of what becomes a regular quintet—with Susana Santos Silva on trumpet, Lotte Anker on tenor and soprano saxophone, Sten Sandell on piano, Torbjörn Zetterberg on bass, and Jon Fält on drums.

At least four of the members of are likely well-known to readers of the blog. Santos Silva was the subject of feature last fall (including a brief interview that’s available here). Lotte Anker has been praised extensively (this review has links to several others). Sandell’s been covered extensively (most recently for last year’s Gush album). And Zetterberg, who has reviewed a ton here, had two albums highlighted in an early-2016 rundown of Swedish music.

Fält was the wildcard for me. A Swedish drummer who appears to play mostly with pianist Bobo Stenson, stylistically he seems to fall squarely in the tumbling percussive mode, but there’s a noticeable deftness to his playing (check out his fills about 10 minutes into “Life,” where he settles into a brief dialogue with Sandell) that spurs on the group in part by leaving tons of room for everyone to fill in and play around with.

At some point early on—possibly because of the presence of Sandell—I was reminded of Townhouse Orchestra, with Evan Parker, Paal Nilssen-Love, Ingebrigt Håker Flaten, and Sandell. (Though I’ve only heard their first album, townorchestrahouse, which was released under Nilssen-Love’s name, I believe, back in 2005.) Here, on Life and Other Transient Storms, there’s a similar lightning-in-a-bottle style of interplay. Predominantly uptempo, rumbling, and fiery, the quintet travels about a million miles in the first half alone. From the opening moments, with Santos Silva and Anker interwoven over Sandell’s ringing piano, this is a thrill ride of top-notch free improvisation. About two minutes in, Sandell plunges into a rolling piano solo, with Zetterberg and Fält falling into an urgent, percussive rhythm. And shortly after, Santos Silva joins with a high, piercing solo, before joining in a stunning duet with Anker.

Both pieces, “Life” and “Other Transient Storms,” move in these cell-like clusters, with duets and trios peeling off the full quintet, and members returning and separating, the whole constantly restructuring itself. I don’t want to misrepresent the album, though, as there is a full range of emotion on display. Life and Other Transient Storms comes across, in some ways, as a deep and thoughtful exploration of life itself, of the necessity of community and an argument against the notion that we’re all in this alone, looking out for only ourselves. Perhaps that’s a radical interpretation of the album, but in these radically challenging times, it seems like nothing is untainted by the threats of chaos and hate. In that sense, Santos Silva, Anker, Sandell, Zetterberg, and Fält’s collaboration is a kind of enchantment, an improvised spell with which to fend off the curse that binds us.
Paul on Saturday, October 15, 2016
Share