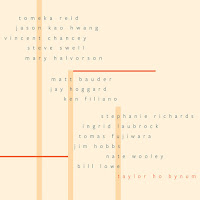 I’m going to get into this review from a slightly odd angle, which is to say that, as a tremendous fan of Taylor Ho Bynum’s music and writing, one of my favorite of his projects remains relatively undocumented, his acoustic bicycle tour. It’s a solo project, very much aimed at pushing oneself to a physical limit, both in the distance and time spent bicycling and in the range of performances. There are clips on Soundcloud and a video documenting the West Coast tour, but the project itself was never fully and formally recorded, probably because much of its beauty stems from its inherently transitory nature. Enter Enter the PlusTet.


The PlusTet isn’t Bynum’s first foray into big bands, but at 15 members with three lengthy, massive pieces, it is easily his most realized project since his sextet. Positive Catastrophe, a ten-piece “little big band” was co-led by Bynum and Abraham Gomez-Delgado. A few years ago, Bynum put together an octet playing his eclectic arrangements of Prince’s music (featuring a Prince-meets-Prime Time rhythm section anchored by Stomu Takeishi and Pheeroan akLaff!). Some clips surfaced on YouTube, but he seems to have moved on. It seemed like a loss, at first, because it’s clearly a passion project for Bynum. He’s written about his love for Prince, and the group brings together a lot of different threads of interest that hadn’t surfaced previously, until the PlusTet.

“Sleeping Giant” calls upon Bynum’s work with Braxton, using some of his orchestral signifiers and theoretical concepts. But the sound and structure of the piece is so identifiably Bynum. After an throat-clearing interlude, the rhythm section lays out an interlocking rhythm for Swell and Reid to solo over. Meanwhile, Bynum conducts the group in ebbs and flows, with melodic lines rising and falling in way that reminded me of Navigation, where the same piece was assembled and reassembled. Filiano takes the lead, following a duet with Hwang, and guides the group towards an extended collective improvisation that resolves with a lovely, robust take on Bynum’s Prince ensemble, while suggesting Sam Rivers’s RivBea Orchestra. The melody soars, and Bynum, Wooley, and Richards all shine during this section, with Reid and Halvorson shading effortlessly throughout.

“Three (for Me We & Them)” opens with a grand Halvorson solo set over Hoggard, Filiano, and Fujiwara’s throwback swing. Bynum layers on horns and winds, before quickly peeling them away to expose a thick groove. It’s textbook big band; the dedication is to James Jabbo Ware’s Me We & Them Orchestra, and the song was originally written for that group. The early sections call to mind Positive Catastrophe before turning towards the bluesier end of the spectrum. Throughout, Filiano and Hoggard are superb, moving from unison lines to gentle plays off each other’s walking rhythms. Fujiwara steps mightily into a late solo that resolves with a rousing statement of the theme.

Bynum explains the title “That Which Only… Never Before” is a reference to something Bill Dixon said just before their final concert together, “Play that which only you could do, but that you’ve never done before.” Bynum was an integral part of Dixon’s outstanding, late-career ensemble albums, and Dixon’s influence is one of the strongest on Bynum (perhaps second only to Braxton). The piece opens with a pointillist improvisation that rapidly builds in both pitch and intensity. Fujiwara and Bynum drive for the first several minutes; their longtime collaboration has been one of the most fruitful in modern jazz. As the full PlusTet assembles itself, Bynum and Fujiwara’s foundation supports the layered improvisation that coalesces around them. Remarkably, this track is the shortest on the album, though it’s packed with ideas that could easily spawn further compositions. One concept from Braxton that echoes through Bynum’s work is the notion of subgroups operating within a larger group. That structure leads the group towards the final section, with its multiple lines drawing together towards a powerful, elegiac finish.

A dense, rousing, and emotional album, Enter the PlusTet feels, beyond just its size, like a culmination of Bynum’s many projects and ideas. The album is highly recommended, and those in
New York can check out the band live at Roulette this March.

A well-written and informative review.

Great review Lee. Taylor is a great musician and composer.