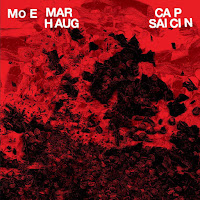 Lasse Marhaug, the Norwegian noise-extraordinaire, has been covered on this blog numerous times before, usually through his collaborations with Paal Nilsen-Love. MoE was more of a mystery to me. Also from Norway, MoE consists of Guro Sklumsness Moe on bass and sound processing, Håvard Skasett on guitars, and Joakim Heibø Johansen on drums. The former two are core members of the acoustic group Sult who collaborated with Marhaug on the 2017 Harpoon (FJB review here). The latter, meanwhile, plays in the noise-rock band Ich Bin N!ntendo (FJB reviews here and here). Ok. So maybe MoE are not such unknowns, at least in terms of their membership. The music they produce with Marhaug, however, is eminently curious, dark, and antic.

Capsaicin begins with a single, heavy bass tone held for lengthy irregular intervals. The resonance builds and bleeds into an underlying low drone. After six and a half minutes of incremental development, Marhaug contributes a quavering static first riding atop Moe’s plodding bass, then interweaving with Skasett’s haunting guitar. At the fourteenth minute, the track begins to come apart. The bass and guitar wend as they have before, but the electronics become frenetic. As the strings and amps fade out, Marhaug transforms his staticky squeaks and hisses into a deeper, Merzbow-esque explosion of sound evocative of a flag fluttering in a gale, or the muted and extended detonation of a bomb. This begins track two, which has a similar flow of guitar feedback, churning bass, and electronic chaos. At times, I hear dampened, groaning voices, distorted bowed cymbals, muffled crashes, and, briefly around the eight-minute mark, a metronomic on the hi-hat, but these are sometimes too processed and fleeting to properly decipher. Such faint and feinted sounds only lend additional enigmatic atmospherics to an already dense and unnerving soundscape.

Track 2 lightens briefly with one of the only melodies detectable on the record. It sounds like a demented merry-go-round tune. The track then dissolves into a pulsing drone and cymbal ride that leads into the third track, another weighty meditation on the constructive and entropic possibilities of harsh, layered sound.

Track 3 ends with a cavernous howling that bridges into the final cut. The rest of the track merges shrieking guitars, relentless bass, restive drumming, and gales of electronic rumblings and manipulated wailing, corroborating that the burgeoning cacophony of the earlier pieces really did point to some impending collapse. This is heavy, blood-curdling stuff. It is also cathartic. About half-way through, the track peaks and the chaos abates. The individual layers slow and separate themselves. The wind rustles and howls. The bass returns to its single-note thuds. And the cymbals carry the track to its eerily restful conclusion.

Now for some points of clarification. This album is better taken as a single-track in four movements than as four discrete “songs.” Each movement resembles the others in effect, but a close listen reveals little repetition and many unique explorations of the boundaries between coarse dissonance and a mucky, mired consonance. As the Utech Records website explains, Capsaicin explores “the fissures left by minimalist drone metal. Those places not yet stepped on, where strange sound textures produced by DIY machines, low frequencies and electromagnetic transductions fit.” This characterization is fitting. This is harsh noise but is also much more musical than that. It plays with and transgresses boundaries of musicality and sound, diving headfirst into the interstices between notes and noise, and the insufficiently-trodden paths between free jazz/improvisation and metal as well as between instrumentation and electronic manipulation and fabrication. And the result is indeed strange, and profoundly so. Clearly, this is not easy listening music for the masses. Still, it is highly recommended for those interested in the more nuanced strands of harsh noise, the less percussion-heavy strands of noise rock, and the darker potentialities of progressive music.