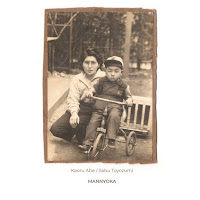 Kaoru Abe's later work is feast or famine depending on your particular taste. The popular consensus is generally that his best work was done between 70’-73’, reaching his creative zenith in the winter of 72’ (if you haven't heard Winter 1972 or Solo.1972.1.21 both are in the YouTube playlist linked below, mind blowing stuff). This period saw Abe laser-focused on speed and power, whereas his later career became more exploratory and expressive, with Abe utilizing multiple instruments to chase his muse (sometimes successfully, sometimes not). In 1978 Abe recorded Overhang Party with Sabu Toyozumi, a wild and sorted affair and sister album of sorts to the new release from NoBusiness Records, Mannyoka. Kaoru Abe played and recorded with Sabu Toyozumi frequently in the year of his passing. The two had been close friends and played together for a decade before they ever put anything to tape. The sessions that make up Mannyoka date to January and July of 1978, flanking the Overhang Party sessions in February and April, with Abe’s tragic death at age 29 coming on September 9th . Overhang Party itself is a mixed bag. Like much of Abe’s later work, there are flashes of brilliance intermingled with plodding multi-instrumental experimentation and self-indulgence on the part of the saxophonist. This takes up the middle half of a pretty bloated record (IMO), and without it the album would be more succinct. So, as it stood I wasn’t sure what to expect from this release given the time frame it comes from, but I was very pleasantly surprised to find some great expended improvisations with Abe on reeds only (soprano and sopranino sax) in fantastic (dis)harmony with the legendary free jazz drummer.

The two-part Song for Mithue Totozumi (named for Toyozumi’s mother) begins with Kaoru Abe on soprano saxophone, squelching and stuttering over the rolling rhythms of Sabu Toyozumi. What makes this late collaboration work so well is how sympathetically Abe plays with Toyozumi. If the legends are true, Abe was known to be a difficult musician to collaborate with (e.g. Keiji Haino), but he sounds as engaged here as I’ve heard him in a group setting. The early thunder of the tracks ebbs into softly blown shrieks and reed squeaking amid the sparse crackling percussion and then explodes into fury again, with the musicians navigating several probing sections amid violent crescendos. Perpetual overblowing became more prevalent in Abe’s later music and its extensive use here renders the pitch of his horn obsolete except on the softest passages. Starting off more introspectively is the three-part Song for Sakamoto Kikuyo (named for Abe’s mother), the first part consisting of a softly blown lamentation from Abe played over sparse, knocking percussion. The second part starts with Abe’s shuddering altissimo shriek probing for double notes and harmonics before disappearing and reappearing intermittently as a whisper of color bobbing to the surface of the Toyozumi’s sparse percussion. Around the nine-minute-mark Abe catches fire on sopranino and around two minutes later, unable to resist any longer, Toyozumi erupts. The third and longest part is my favorite of the bunch due to its relative fieriness and good to great interplay. Abe pushes the sopranino as far as it will go, making it sound malicious and throaty over Toyozumi’s vicious percussion. The final few minutes finds the duo tapering off the improvisation, reducing in speed and volume until nothing remains.

This is about as successful an album as you can get from Abe’s late phase. Absent are the extended experiments, replaced by here with a sympathetic ear and a willingness to explore as a duo. However, also absent is the careful attention to his searing tone and lightning fast articulation that makes his early work so exhilarating, replaced here with a broader, uncontrolled palette. I’m not saying that this is bad by any shake of the stick, in fact just the opposite; I think it’s a very good reissue and worth your time to listen (especially for Abe fans). But relative to the portion of his work that makes him so special, it’s a fairly middling effort.