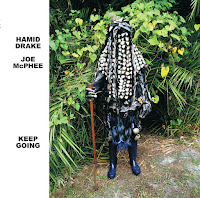 Quoting these words by legendary political activist Harriet Tubman, Joe McPhee introduces this album and announces the direction of the music. This is a political statement. He quotes these words in a quiet but firm voice and then his saxophone sings a lament, a heart-felt blues, that emanates black history. In his typical way McPhee raises the level of anger and frustration with torn lines, then he literally shouts “Keep going“ three times, as if he wanted to encourage his brothers and sisters not to lose hope. But Tubman’s words are not just a political statement, they also describe McPhee’s music. Whenever he seemed to be stuck, he tried something new, he has believed in the idea that there are musical areas that still have to be explored, that the boundaries have to be expanded. This has to do with a memorable incident in the past: John Coltrane’s funeral. McPhee was there, it was a horribly sad moment, but the service was also a glorious affirmation of everything Coltrane was - for McPhee the funeral was a celebration of life, in which Ornette Coleman’s classic trio of the Golden Circle period and Albert Ayler's band played. This experience - that even if something wonderful has ended, something new will arise - has influenced his music to this day.

In November Joe McPhee is going to celebrate his 80th birthday. If you see him, you think he’s just 65. The man is full of energy, mentally and physically. I will never forget a scene from a gig in Weikersheim two years ago, when he took a short run and jumped onto the stage. These days he's making more music than ever before, he seems to be on a never ending tour and he releases new albums constantly. One of his preferred contexts is the sax/drum duo, for example with Paal Nilsson-Love, Chris Corsano and Eli Keszler. That’s why it's strange that he has only worked once with Hamid Drake, obviously an ideal comrade-in-arms - on Emancipation Proclamation: A Real Statement Of Freedom (Okka Disk, 2000) -, although the two have played in Peter Brötzmann’s Chicago Tentet. In February 2018 they finally found some time to record something new, and the new collaboration shows what we have missed. Keep Going combines the drummer's warm approach and unique sense of free swing with the saxophonist’s/ trumpeter's musicality and quest for social justice again. Five of the eight tracks directly refer to prominent figures of African-American history, social rights activists and politicians: the pieces are dedicated to Fannie Lou Hamer, Medgar Evers, Malcom X, Martin Luther King, Lucy Stone, John Robert Lewis and Barack Obama.

Keep Going displays everything which makes Joe McPhee’s music so great. “Keep Going“, the title track, is the only one that highlights McPhee’s roots in blues and gospel so prominently. Pieces like “For Don't Let 'Em Drop Them Goddam Nukes On Us Lord“ and “Morning Star (for Lucy Stone)“ reach back to a 1960s- and 70s-tradition of free jazz, to musicians like Albert Ayler, Frank Lowe and Noah Howard. In these pieces McPhee hurls out angry, convulsive riffs, blurred, overblown messages, which are propelled by Drake’s nervous drum rolls. On three tracks, “Medgar / Malcolm / Martin“, “Makes Me Wanna Holler (For Representative John Lewis)“ and “Time Was (for Barack Hussein Obama)“ McPhee is on pocket trumpet. At one point in the latter piece he plays into an open gong, which adds otherworldly overtones to his music. This is the other side of his music, the introspective and meditative one, which is rather interested in sound excursion. All this is accompanied by Hamid Drake’s subtle and emphatic percussion, as usual deeply rooted in a black jazz tradition. On the one hand it perfectly supports McPhee’s traditional side, on the other hand it contrasts the experimental approach telling a very old story from a different angle.

Keep Going presents an attitude, it shows that free jazz can still be a political comment. It evokes the days of Sonny Rollins’s “Freedom Suite“, Charles Mingus “Fables of Faubus“ and John Coltrane’s “Alabama“. In these days, in which the situation of African Americans in the US seems to have become worse, it’s necessary.

Keep Going is available as a CD.

You can buy the album here.

Thank you, Nick. McPhee in a sax/duo context is always great. He's such a great man. There's a very nice title story about him in The Wire, too.

I'm going to review it, Stef. :-)
Yes, there's always a lot of gospel, blues and soul in McPhee's music. On the other hand he's also into very abstract and sound exploring stuff.