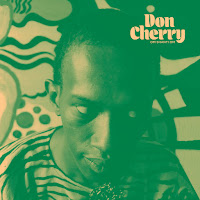 Don Cherry has been one of the musicians I listened to almost daily some decades ago. I liked his incredible versatility, his open-mindedness, his optimism, his curiosity, his sense of exploration and synthesis, his joy of life and of course his music. He was a man of the sixties and seventies, growing up in a world where the establishment - politically and musically - was being challenged by the younger generation: the beatniks, the hippies who were looking for a new and better world, based on tolerance and respect for humans and nature, a citizen of the world who was more interested in finding kindred spirits than belonging to a group himself.

His early career was linked to the early free jazz icons like Ornette Coleman, Albert Ayler, Sonny Rollins, John Coltrane, Pharoah Sanders, Archie Shepp, Bill Dixon. In the early seventies he started exploring music from Africa, India and Brasil, spiritualism and hippie philosophy and integrating it in jazz with his "Organic Music Society". Their first album already included Brazilian berimbau player and percussionist Nana Vasconcelos, Moki Cherry, Bengt Berger, Okay Temiz ... with lots of singing, suite-like compositions. On "Relativity Suite", also from 1973, Chinese ching player Selene Fung adds even more global flavour to Cherry's all-embracing musical vision. Cherry increasingly started playing other instruments, such as flutes, percussion, piano, melodica, douzn' gouni. Instrumental perfection and precision were not his primary focus, but rather the creation of a sonic universe that was new, global, inclusive with the ambition to create something universal and spiritual, not imposed out of some cerebral and abstract concept, but grown organically from the already existing sounds of many cultures. Albums like "Relativity Suite", "Orient", "Eternal Now", "Brown Rice" are part of his vision in that period.

With "Hear & Now", he started integrating fusion elements, and some might call his musical output erratic at moments, with movements from failed electronic excursions with John Appleton to Turkish folk music on "Live In Ankara". At the end of his career, his music became more accessible with "Homeboy" and "Multikulti". But even then the choice of genre on his next album remained totally unpredictable. "Art Deco" brought him back to bop and early free jazz "standards", while interspersing his entire catalogue with the wonderful "Old & New Dreams", his collaborations with Codona, his duo albums with Ed Blackwell, and his albums with musicians from around the world: Latif Khan, Hassan Hakmoun, Doudou Gouiran, Lou Reed, Ian Dury, 'Rip Rig & Panic' (with his step-daughter Neneh Cherry), Steve Hillage, Heiner Goebbels, Terry Riley and the mad album with Krzysztof Penderecki. He was very much in demand by many bands, possibly because of his personality, or out of his own curiousity to try something new, but definitely because of his incredible versatility to fit it any kind of music, even if his soloing and sound are recognisable from far away.

Sorry for the long intro, and my heart stopped a beat when I learned there was an as yet unreleased Don Cherry album available.

It was recorded in 1976 by the Italian public broadcasting television (RAI), with a limited version of the Organic Music Society, with Cherry on vocals, trumpet and percussion, Nana Vasconcelos on percussion, Italian guitarist Gian Pierro Pramaggiore and Moki Cherry on tanpura. The music consists of slow vocal chants, incantations to be sung collectively, as part of spiritual and ecstatic rituals.

One piece is a berimbau solo by Vasconcelos, two other tracks just hand-clapping and singing. It is all very friendly and sweet, with no real moments of surprise and no sense of artistic commitment, and as such it's more like listening to a group of friends having fun.

Don Cherry's music has made for days of continued joy in my life, but also moments of great disappointment. This one leaves me indifferent. It's nice that it's been published. As a fan that pleases me. But that does not make it a good album.