Somehow older recordings by Don Cherry are getting released, and we can only applaud the labels for their efforts. Cherry was a man of many genres and musical collaborations, even if his signature style was always joyful and optimistic. A short overview of new albums. 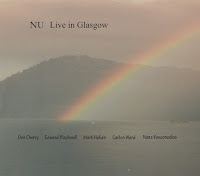 "Nu" is the band of Don Cherry on trumpet and Doussn'gouni, Carlos Ward on saxes, Mark Helias on bass, Nana Vasconcelos on berimbau and percussion, and Ed Blackwell on drums. Possibly the best album by the quintet is their "BBC Sessions - Live At The Bracknell Jazz Festival, 1986" from 2002.
This album is the recording of a live performance in Glasgow on October 24, 1987. They bring some of Cherry's familiar tunes, such as 'Art Deco', 'Pettiford Bridge' and 'Birdboy', and Mark Helias' 'Pitchfield Blues', possibly the first version of the composition on record, later to appear on the bassist's "Desert Blue" album.
Today, we would call this music free bop or even post-bop. It swings, it dances, it's rhythmic, structured with recognisable themes and great improvisations. The sound quality is excellent, and the audience enthusiastic (and numerous!) ... and so is the music. All five musicians are in stellar shape and get time for some solo demonstrations on their instruments.
As with so many of Cherry's live performances, his narratives between the tracks are lengthy, teaching his audience about his music and instruments. It may be boring to some, but fun to others, making the performance somehow more real and as if you're actually in the audience.
There is a lot to enjoy on this album, even if the total time is short.
A must-have for fans. 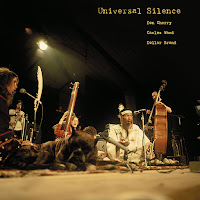 Some of you may be familiar with "The Third World Underground", an album by Don Cherry, Carlos Ward and Dollar Brand/Abdullah Ibrahim, presenting a live performance at the Jazz House Montmartre in Copenhagen on November 14, 1972, and released in 1974.
This album has the same ensemble, performing live in at the Berliner Jazztage on November 3, a long week earlier, and broadcasted by WDR Köln, the public radio station. Don Cherry plays trumpet, flutes and berimbau, Dollar Brand piano, and Carlos Ward alto sax. All three men sing too ... and a lot. The music is built around the African and bluesy harmonies and rhythms of Brand's infectious piano, and it is a friendly meeting, with lots of singing, and not that much of trumpet or alto. Most moments are gentle and even easy to sing along with (if you so wish). They do sing a lot ... did I mention this? The real moments of musical high energy are rather rare but they are present. In that sense it is completely different from "Third World Underground", which is musically much more interesting and compelling.
Three of the pieces also appear on the Danish recording, but obviously in a different rendition: Cherry, Bra Joe From Kilimanjaro and Waya-Wa-Egoli. The other pieces are improvisations.
The crowd is large and incredibly enthusiastic. 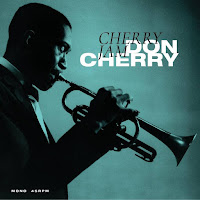 "Cherry Jam" is from a much earlier period, and gives us a concert in Copenhagen in October 1965 with Don Cherry in the company of Mogens Bollerup on tenor, Atli Bjørn on piano, Benny Nielsen on bass and Simon Koppel on drums. It is clear that the Danish band is very strongly rooted in traditional jazz, and as a result there is not much excitement to be had musically. The album brings a few new and never released Cherry compositions, which will make it interesting to fans.
The music was taken from a 1965 pre-record for Danish national radio. The album was released in 2,000 numbered vinyl copies at the occasion of Record Story Day in 2020. 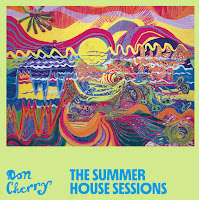 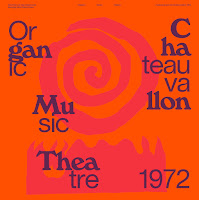 We make a big musical jump, even if the time of the "Summer House Sessions" is only three years later in 1968, and the band a group of Swedish musicians, with a Frenchman, an American and a Turk to complete the ensemble: Bernt Rosengren on tenor saxophone, flutes, clarinet, Tommy Koverhult on tenor saxophone, flutes, Leif Wennerström and Jacques Thollot on drums, Torbjörn Hultcrantz and Kent Carter on bass, and Bülent Ateş on hand drum, drums.
The album is a recording made with musicians for whom Cherry organised workshops in the months before. They put their learnings into practice in these long improvisations. The music demonstrates Cherry's aspiration for a universal language through music, incorporating many ideas and rhythms, all integrated in one joyous and communal interaction.
On the second album, French television recorded the Festival de jazz de Chateauvallon in 1972, including Don Cherry's Organic Music Theatre. The band consists of Cherry on piano, harmonium, tanpura and vocals, Naná Vasconcelos on berimbau and percussion, Christer Bothén on donso ngoni, piano, Doudou Gouirand on soprano saxophone, alto saxophone, and Moki Cherry on tanpura and vocals. Cherry was looking for other ways to create a universal, more inclusive, natural music that would speak to all mankind. Notice that he does not even play trumpet on this album. To his credit, he wanted to involve the entire audience in the concert, by organising group karnatic singing, showing puppet theater, and inviting people to join otherwise. Jazz, Asian and African music are interspersed with new agey visions. It's all a kind of friendly gathering around the camp fire.
These come from the vault of the Swedish Jazz Archives. More is to come. Both CDs will only be released in June but can already be ordered now.
Listen and download from Bandcamp. 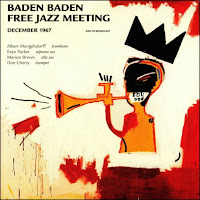 The label 'Alternative Fox' released the Baden Baden Free Jazz Meeting from December 1967. Clearly, the musicians listed on the cover do not necessarily perform together. The A-side contains two pieces by trombonist Albert Mangelsdorff. The first with Jeanne Lee on vocals, Buschi Niebergall on bass, Gunter Hampel on vibes and Pierre Courbois on drums. The second with Evan Parker, Peter Kowald and John Stevens. The B-side starts with a wonderful trio of Marion Brown, Peter Kowald and Sven-Åke Johansson.
The last and longest track is an improvisation with Don Cherry on trumpet, Evan Parker on sax, Buschi Niebergall and Peter Kowald on bass, and John Stevens on drums. Despite the good intentions and the positive vibe in the music, the improvisation does not really seem to gel, especially the interplay between Cherry and Parker is not optimal, clearly showing their different perspectives on music.

This music was already released by Hi Hat in 2018. The music is the same, the order of the pieces are different.
Albert Ayler with Don Cherry - European Recordings Autumn 1964 revisited (Ezz-thetics, 2020) 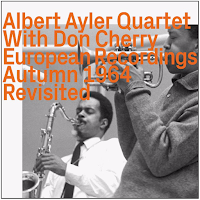 Ezz-Thetics, re-releases in one double CD the performance of the Albert Ayler Quartet with Don Cherry, Gary Peacock and Sunny Murray during their stay in Europe in 1964. Both CDs were already released separately by HatOlogy in 2016 and 2017, but were remastered for the occasion. The first CD presents radio recordings for the Dutch public radio Hilversum. Three tracks - Vibrations, Saints and Spirits - were recorded for a radio performance for the Danish radio.
The second CD gives a live performance at the Club Montmartre in Copenhagen in the same period.
Both Ayler and Cherry were special artists. Hearing them together is always a treat even if it often sounds as if Ayler is just doing his thing, in the expectation that the other three artists will create some background and depth. Maybe the most amazing thing is that these performances were made on public radio in the Netherlands and Denmark at that time. I am not sure how many people listened to this, but I'm sure they did not know what they were hearing. For the ones who did know what they were hearing, I'm sure this music influenced broadened their horizons and opened ears for this new kind of music on the European continent.
In short, we may be happy of Don Cherry's musical legacy. As with many searchers and seekers, adventures do not always lead to finding treasures, but the journey is equally interesting. Even if some of these albums sound dated, Cherry's authenticity and genuine belief that music could turn this world into a better place with more understanding among peoples deserves our appreciation. We can be more than happy that his legacy is still being refreshed. We can also be very happy that decades ago public radio and television stations in Europe had so much interest in free jazz.
Stef on Thursday, March 04, 2021
Share

Whilst it's great to see so much of Cherry's music becoming available I can't help but wonder how much of the proceeds from these releases will go to his estate/family. Which, if any of these are official releases sanctioned by them? Or are we looking at nicely dressed bootlegs?
I wonder if this very admirable blog has an editorial policy on reviewing bootlegs.

MGJ, these are often complex matters. A number of above recordings have been in circulation on the Internet for a number of years and the question of ownership can be a grey area. Some may be out of copyright, in other cases the musicians may have received payment at the time, or ownership might be with the radio station that made the original recording. And as has been seen elsewhere, such as with Triple Point Records, where it is considered that payment should be made to the musicians or their estates, this can increase the costs of the album considerably, and some then complain that the album is unaffordable.

I think it’s a little unrealistic to expect reviewers to conduct full enquiries into such matters before reviewing an album, research that may provide no satisfactory answer.

Hi MJG, these are all legitimate releases, not bootlegs. We may occasionally refer to bootlegs, but not review them.

Hi Stef, thanks for the reply. I'm pleased to hear that's the approach here

"Om Shanti Om", a live-in-studio recording from 1976, released last year could be added.