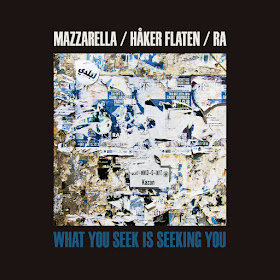 Sometimes a piece of music seems to trigger a sense of déjà vu. I had that experience listening to the Nick Mazzarella Trio’s new recording. It was as if all the things that had caught my sincere attention for some years was suddenly distilled into one set of compositions. That was an illusion, as déjà vu always is; however, it was not without some substance. I heard traces of traces of Andrew Cyrille, Steve Lacy, and (personal favorite) Fred Anderson (cue the orchestra to bow and chant “we’re not worthy!”).

This recording hit me like some of those did. The beginning of the first, title, cut follows a familiar script. Mazzarella opens up with three notes, blends them into a line, and tells a story. Slowly and softly, at first, Avreeayl Ra drums up from below. The sax plays over the field of percussion and then, one note at a time, Ingebrigt Håker Flaten’s bass comes in.

Is this free jazz? No. Mazzarella is credited with all the compositions. If it is composed beforehand, at all, then it isn’t free. Is it Avant Garde? Yes. There is a narrative here (see composition) but the focus is digging into the constituent parts of the narrative. This is my favorite kind of music: free here and there, with a plot but not tethered by the plot.

The second cut, “setting out” begins with the soft touch of distant drumming, like in an anthropology film. Somewhere, close but not too close, something important is going on. In comes the sax, right here and now, somber and expectant. The drums rise a bit in volume and cascade, telling the backstory. The bass enters with a buzzing texture, and then all three instruments fill the space with their intelligence.

In “recollection,” such narrative as there is materializes out of the drums and bass. Toward the middle, the horn goes silent, and we get a marvelous exchange between percussion and bass.

In “debris” you get bowing behind a horn that goes from squeaky hinge to bumble bee. The passion and energy scatter everything around until the twister has passed and the horn can settle back onto the bass line, now thumping again.

Probably the best cut (I am still deciding…no, I’m quite sure) is the last one: “latter day protest song.” The passion builds and resonates toward the middle when we get the simple song. Repeated again and again with penetration and wounded hope. Now we have a protest song!

This is magnificent music. It hits the sweet spot for me, where a lot of the ley lines of modern jazz meet. KB says check it out.

ps. Some nice recordings to follow this would be The Fred Anderson Quartet - Dark Day + Live in Verona (1979); The Steve Lacy Trio - Rent (1999); and The Andrew Cyrille Trio - Good To Go, With A Tribute To Bu (1995). There are two sins for a jazz collector (and especially for the fan of edgy jazz). One is ancestor worship. The only good musician is a dead musician. The other is ancestor neglect. Hungry ghosts must be fed. In my reviews, I intend to guide you toward righteousness.