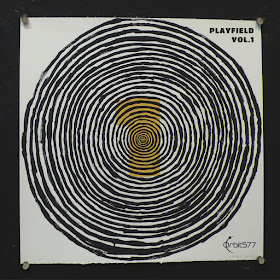 Playfield is both the band and the project, a trilogy of records released between March and May 2021. Before getting into the actual recording here is a chain of thought that occurred to me while listening to these three half-hour-ish discs over and over. I invite you to skip down three paragraphs if this sort of thing is not a good time for you the way it is for me.

A Few Wandering (but Salient) Thoughts Before the Review

I don’t think I ever understood the importance of the shift in jazz at the end of the 1950s, when “modal jazz” became king. Yeah, I understood that that became the way “everyone played,” but I don’t think I understood until recently that aside from the ostensibly theoretical break from harmony that Bebop’s “greatest logical extent” approach provoked, it was a break from the very idea of tension and release itself. In Western music this was huge and in popular music, it was unheard of.

No longer did music have to follow the Beethovian arc from sunny picnic day, to wind picking up, to storms, to Gods raging, and back to quiet idyll where we picked up the pieces. No longer did our music have to be shaped by the ecstatic moments or traumas. The love stories didn’t have to focus on when we fell into or out of love or were betraying or betrayed, but could spend time with long relationships inhabited by actual humans ( Dexter Gordon’s, “Tanya,” for one early 18 minute example). We didn’t have to take quests, we could just walk. We didn’t have to get somewhere to do something, we could just wonder, and journey. We could take trips. We could be trippy. It’s not just a different emotional experience. It’s a different kind of emotional experience.

The shift from bop to modal was not just a shift in aesthetic or technique, but a shift in values. Harmonically derived music creates a type of frame through which a story (our lives) is told. Modal jazz offered a different frame through which a different type of story could be told — a more meandery story ( Bitches Brew or In a Silent Way ), more poetical than narrative, more descriptive than interpretive, and more open to the languages that came afterwards—electronic music, minimalism, rock/funk, free jazz, etc. It is emergent.

My point — and I do have one — is that these three Playfield pieces immediately made me feel meandry and wander-y. I felt like I was walking somewhere, and walking somewhere else. And walking around somewhere, being somewhere, is one of my favorite things to do. The saxophones, rhythm, guitars, organ (varying sounds), and a voice that seems to cast the ghost of Abby Lincoln in this topian setting reminded me of my days walking around New York City just fascinated by the sweat, the smell, the architecture and the architectural salvage, and people and stories. Listening to this, I was grateful all over again NOT to be chained to tension/release.

Playfield is Daniel Carter: Horns and Reeds; Luisa Muhr: Voice; Ayumi Ishito: Sax; Eric Plaks: Nord piano; Aron Namenwirth: Guitar; Yutaka Takahashi: Guitar; Zach Swanson: Bass; and Jon Panikkar: Drums. Carter is the ostensible leader, though the origin story is vague-ish. Playfield emerged as folks emerged from their apartments in NYC last summer. Daniel Carter (founder of 577 Records) is called “instigator,” but the process was organic. The recordings were done outside in Brooklyn in October 2020 and are contextualized within the pandemic. The trilogy of records “offers the musical equivalency of a walk through New York, meandering through the city’s conflicts, unparalleled diversity and mutual harmony.” These are three tone poems of the type that Ellington envisioned in the 1930s, but could never pull off with the swing-based language he had to hand.

The three discs each have a different remit. Solar (Vol. 1) is cast as more of a tour of the city during the pandemic, the protests, the injustices, etc., but it’s not about those things. The Middle (Vol. 2) hints at more of a story than the others, being called “the center of conflict” by the musicians involved, but that might apply to the content of the music, or the process of its creation. The “conflict” section, though, is not combative or performative, but slow and mysterious, immersive. There’s a darkness and uncertainty and (even knowing there’s a volume 3 in the queue), no clue on how (if) the conflict resolves. It’s here that I am most reminded of Max Roach and Abby Lincoln’s “We Insist!” Luisa Muhr’s voice is remarkably striking. Focusing the amazing energy generated by the ensemble in moments. They aren’t the point, but they are a point.

Afterlife (Vol. 3) does not address the conflict raised in The Middle (as if to say the resolution is the least interesting thing about a conflict), but acts as more a denouement or fifth act to project. In theater, the fifth act of the five act structure is a place of picking up pieces and reflecting — the characters asking, “How have we been changed by these events?” Having been recorded “on a chilly Autumn day, incorporating the architecture, the people, and the somber feeling of a pandemic in a singular city,” I feel like Carter and crew are incorporating that reflection into the music itself. In their own words, they “gesture towards something mysterious, sophisticated and earnest, towards a grieving city and its ever-forward motion.” I know that I am asking myself, “How has experiencing this music changed me?”