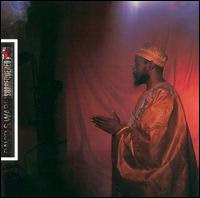 David S. Ware is a force of nature on tenor, someone who's managed to collaborate with the best of the American free jazz scene : Matthew Shipp, William Parker, Suzy Ibarra, Hamid Drake. On this album he is accompanied by Shipp (piano), Parker (bass) and Guillermo E. Brown on drums. On some of his CDs one gets the impression that the band has only a supporting role, and even hardly gets any space to do their thing, as is sometimes the case on the three-disc set "Live In The World". That is not always a negative factor : Ware knows how to keep things interesting. Surrendered is somewhat different. More subdued, more melodious, even harmonious, and hence somewhat warmer and more accessible. There is an atmosphere of spirituals you rather expect with Albert Ayler than with David S. Ware. Yet his playing remains 100% free jazz : no sound of his sax is left unchecked to convey a wide emotional range, expressing dispair, fear, anger, resignation, hope. Last year he also issued a similar "calm" CD, Balladware, a little bit too mellow to my liking. For those who do not know David Ware, Surrendered will offer a good introduction.
Stef on Monday, January 15, 2007
Share