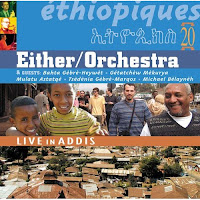 Wanna have fun? Then put on this CD. It's a two hour long afro-jazz fest with strong compositions and a tight horn section. The Either/Orchestra is a mini big band with four saxes, two trumpets, a trombone and a rhythm section. One of their earlier albums, "More Beautiful Than Death", was alreday inspired by the Ethopian music of Mulate Astatqe, but on this double CD, they went to Addis Abeba, the capital of Ethiopia to meet the master himself. The series Ethiopiques (published by the French label Buda Musique) is really worthwhile checking out, especially Ethiopiques 4, with Mulate Astatqe himself playing the lead role. Addis Abeba has known a very lively jazz scene that developed in parallel with western jazz since the 60s. Astatqe, on keyboards, vibraphone and percussion also joins in on some of the songs of this album, together with some of his band members. It's hard to describe the music : African rhythms, sometimes a tinge of Latin, sometimes middle-eastern influences, even some Balkan humpa for all I know, but always with a tight horn section, almost non-stop four percussionists doing their thing, with ample space for the soloists to perform (and how!), exciting with once in a while a subdued moment, strong melodies throughout, but a party from beginning to end, and that's also to the liking of the audience that listens carefully, applauds, jeers and cheers. Have fun too!
Stef on Monday, January 15, 2007
Share