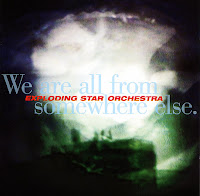 Rob Mazurek is hard to pigeon-hole. With his Chicago Underground Duo/Trio/Quartet he produced consistently great avant-garde jazz CDs. On his solo albums, he took often even more adventurous routes, including some failures (including his concept of underwater trumpet, which is a nice gimmick, but not to listen to for a whole album). Last year's electronic Brasilian experiment with the Sao Paulo Underground was also not really my cup of tea. But now there is the Exploding Star Orchestra, a mammoth of a CD, a collosus of music : structured chaos, plenty of energy, intense and sensitive pieces, a line-up of top musicians, yet with a clear coherent vision in terms of composition and execution. The CD consists of three pieces : Sting Ray and The Beginning Of Time, Black Sun, Cosmic Tomes for Sleep Walking Lovers. The first notes of the CD set the tone for the whole : with a solid beat not unlike the Mission Impossible theme, the "beginning of time" commences, with flute, vibraphone and trombone in the lead roles, the rhythm and melody suddenly change after four minutes, but the tempo remains high and relentless. On one part of the first piece, the energy of some twenty eels is transformed into sound, as a background for some free improv. But don't let this deter you : it does work. The second piece is introspective piano music and the third brings free group improvisation, interrupted by repetitive minimalistic music, orchestrated chaos, tight interplay and strong soloing. I have no name for this music. It truly is genre-defying. It's not big band, not experimental, not free jazz, not avant garde, not mainstream, not spiritual music, not film music, but it is all of it. This music is not always for sensitive ears, but anyone will have to acknowledge the musical power of "We Are All From Somewhere Else" .