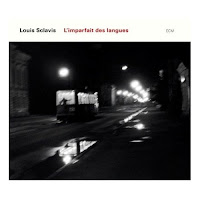 Louis Sclavis is a French clarinet virtuoso who has played with almost everyone of relevance in the European avant jazz scene in the past decades (Evan Parker, Brotzmann, Tony Oxley, Lol Coxhill, Henri Texier, Marc Ducret, Bruno Chevillon, ...). He has found his regular place with the ECM label for some time now. Much of his music is very complex, distant, cerebral, sometimes tending towards modern classical music, and hence not really my cup of tea. But the good news is that his albums with Aldo Romano and Henri Texier on the Carnets de Route trilogy (buy!) brought him back among the people, because this CD is warm, accessible (relatively speaking), and with lots of "Soul", something his previous albums lacked in my opinion. For this album he created a band with very young French musicians on sax, guitar, keyboards, bass and drums. The melodies are absolutely gorgeous, with influences from all around the globe, and like in many CDs by Henri Texier, French folk ingredients are omnipresent. But Sclavis brings this tradition a step further, past the deconstruction of free jazz, and reconstructs the melodies with electronics and rock elements. The fourth piece "Le Verbe" brings this whole transformation by itself. The title of the CD explains the philosophy : "l'imparfait" is at the same time the grammatical term for the past, but it also means "imperfect", such as languages and music, which continuously evolve, and hence impede the possibility to properly communicate, and yet despite these defects still make it possible to communicate, each in his own dialect or interpretation, to create a new language, one that is all-encompassing, one that is perfect. But that is my own personal vision of things, in retrospect. Whatever it is, the music is beautiful, moving, surprising, creative, intense, rocking, swinging, ... Sclavis re-invented himself ... and music history in the same effort. A gem!