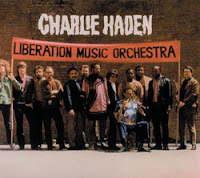 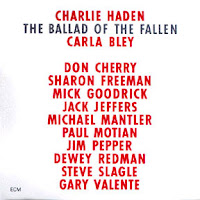 These are the first two albums of Charlie Haden's Liberation Music Orchestra, a band with which he has recorded with various line-ups with a frequency of one album per decade (1969 "Liberation Music Orchestra", 1982 "The Ballad Of The Fallen", 1990 "Dream Keeper", 1999 "The Montreal Tapes", 2005 "Not In Our Name"). The music in this series brings a combination of traditional Central American (march) music, big band and free jazz. The overall tone is descriptive and liberating at the same time : the music tries to capture the suffering and the struggle of the oppressed masses, yet at the same time it tries to liberate by breaking the boundaries and rules (and the revolution is also a musical one). You can hear the armies marching, the mothers crying, the leaders perorating, the wounded moaning on the battlefield, praise being sung to the heroes. To hear a band consisting of jazz icons such as Haden himself, Don Cherry, Carla Bley, Jim Pepper, Mick Goodrick, Dewey Redman, Paul Motian, Michael Mantler play a triumphalistic revolution song with the title "The People United Will Never Be Defeated", sounding like your local brass marching band, is something unique, and even more so once it collapses into Haden's beautiful, serene "Silence", with a slow big band unisono sound, and Cherry's trumpet soaring above the melody like only he can do it, just to evolve again into a contemplative piano and bass duo in "Too Late". Sentimental? You bet, and for the full 100%, yet it never becomes too mellow or shallow. Therefore the antidote of the improvizations works too well. This is a clash of two musical styles, which have nothing in common, and even are each other's opposite. This contrast is the strongest on the first album, emphasizing the chaos and the despair. Both albums have a "suite" structure, the themes flowing into one another, with varying line-ups in the same piece, seamlessly moving on from screeching free jazz blowing over Spanish guitar to a bass solo and marching band music. Memorable compositions are Haden's gorgeous "Song For Ché" and Ornette Coleman's "War Orphans". On "The Ballad Of The Fallen" the music is more controlled, the compositions more outspoken, and the difference with the later CDs is that it does not decline into the programmatic political sentimentalism of "Not In Our Name". And on both albums Haden takes the space to demonstrate his improvisational genius on bass, a combination of technique, esthetic beauty and emotional expression. Not to be missed.
Stef on Monday, March 05, 2007
Share