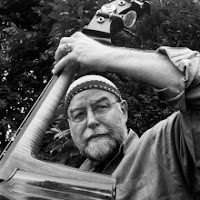 I have most of Henri Texier's albums, with the exception of his latest, "Alerte à l'Eau" published in February of this year. But why do I have all his CDs? Well, that's very simple : this guy knows what music is all about, and he has his own modest vision on it. He is a phenomenal bass player, who manages to keep the ground tone while being very melodious at the same time. Furthermore, he integrates many influencess in his music, starting with French folk music, of which he changes the often joyful melody into a jazz-format : extending and stretching the melody, putting the accents differently, and making the sound a little bit darker, more emotional. A "Texier melody" is hence easily recognizable, and that is also the case on his CDs with Louis Sclavis and Aldo Romano. But it doesn't stop there. Also Arabic and African influences find their way easily and imperceptibly into his music. He made his best albums with his Azure Quintet : the same players as on this album, but with Bojan Zulfikarpasic on piano, and Glen Ferris on trombone : "Mad Nomads", "An Indian's Week" and "Mosaic Man" are easy to recommend. Especially Bojan Z's piano is worth listening to : he adds some extra Balkan rhythms and melodies into the mix. On two of his other CDs ("Izlaz" and "Colonel Skopje") Steve Swallow joins on his electric bass. A quartet with two basses, that's something different, yet it works. 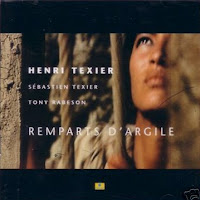 Ok, but why then choosing Remparts D'Argile as the record of reference? Indeed, it's film music, and very often film music is boring if you don't have the pictures that go with it, but that is definitely not the case with this album. I find this album excellent because it reduces Texier's music to its bare essence : the power of rhythm, melody and improvization. After the complexity of arrangements is being filtered out, what remains is raw emotion : joy, sadness, dispair, fear. Tony Rabeson is great on drums, but Sebastien deserves praise for the variation he brings on sax and clarinet. And Henri? Well, as usual he is carryng the whole building, inconspicuous as most foundations, he soloes, he carries the rhythm, he puts the accents, he propels the other players forward, he even pushes to swing once in a while ... And the music? The music is absolutely gorgeous. Great melodies, perfect dosage of interplay and improvization. Actually, the great thing about this CD is that you don't need the movie. The music is powerful enough.
Stef on Thursday, March 08, 2007
Share