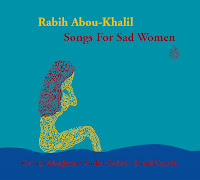 For the first time in a long time Rabih Abou-Khalil goes back to the roots of his music, like what he already brought in his albums "Nafas" and "Roots & Sprouts". For those albums, Selim Kusur was the other main soloist, next to Abou-Khalil himself, on the Turkisch "nay". On this CD, this role is taken up by the Armenian Gevorg Dabaghyan who plays the "duduk", an instrument familiar to the oboe. Rabih Abou-Khalil's music is very recognizable, despite the variations in line-up he has had over the years, ranging from mini big band, over classical string ensemble to traditional world music. His rhythms are complex and change all the time, whereas his melodies with sometimes endless themes spiral en flow against these rhythmic changes, offering a pretty unique musical concept. It sounds complex, well though-through, but at the same time very natural. Furthermore, he leaves lots of space for improvization, in which he and all his carefully selected band members perform to the level of excellence. As an oud-player Abou-Khalil is totally different from Anouar Brahem or Dhafer Youssef. Brahem has a very soft touch, while Abou-Khalil has a more percussive approach (and you hear the sound of his guitar pick) and he goes much deeper emotionally when improvizing. I love the way in which he can sustain lower tones, then pauzing and leaving some space, then again playing some long sustained notes, building up the tension and in an almost minimalistic way creating emotional depths (or heights if you like). Dabaghyan's duduk is a totally different instrument from the ney, it has a more sentimental tone, even mellow at times, but that is luckily only apparent in the opening piece. Michel Godard is divine as usual, this time not on his tuba, but on the serpent, a medieval reed instrument producing bass tones as well, and in Godard's hands even an instrument for soloing. Percussionist Jarrod Cagwin is also a perfect fit for this kind of music, with a rich variaty of musical traditions in his bag. This is not jazz, not comparable to The Cactus Of Knowledge or Journey To The Center Of An Egg, yet it's the same musical adventure, full of variation, emotional, melodic and rhythmic power. In the face of all the mediocrity we are bombarded with, this album offers a refreshing piece of genuine art.
Stef on Friday, March 16, 2007
Share