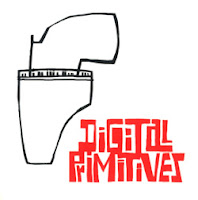 What is this...? An absolutely new way in the approach of jazz! Free jazz piano-player and iconoclast Cooper-Moore does not play a note of piano on this album, but he plays "diddley bow, mouth bow, bango, voice", some pretty unusual instruments which nevertheless fit perfectly in the music on this album. This is free jazz with a high level of joy in the performance but also of fun in the music itself : rhythmic complexities, some hard blowing at times, and especially the incredible interplay on these short yet to-the-point pieces. Chad Taylor on drums is exceptionaly strong, but Tsahar on sax is stellar as well, even composed at moments, and it is indeed a rare occasion when you hear the Israeli sax-player hit a tune. And then there is Cooper-Moore's role with the instruments he seems to have borrowed from the etnographic museum around the corner. This music is hard, funky and different : a free jazz version of Tom Waits, even to the extent that there is even a use of traditionals, as in "Ol' Saint Peter", on which Cooper-Moore even sings, and not bad at all, listen to it on the link below to have an idea. But it's not all funky funky, there are also some quiter pieces, even subdued, such as "Refuge" or emotinally strong such as "Money Wars", but enough talking : all the music can be heard below : judge for yourself.

Listen to the album :


Here is some clarification I received from cooper-moore about the review :

"The song "Ole Saint Peter," was written by me in honor of the late German bassist, Peter Kowald, whom we greatly admired and very much miss.

I've only heard Tom Waits a couple of times. I grew up listening to Oscar Brown Jr and feel very close to what he was doing."