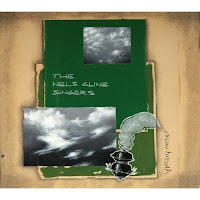 I'm always amazed to see that on the release date of an album, it can already be downloaded via Emusic.com, at a fraction of the price it costs in the store. I assume that the record companies see their benefit in this, otherwise they wouldn't do it. And for the music lover this is a pure joy, especially if he or she doesn't live in the US, because the availability of albums in Europe or elsewhere in the world is not always within the next months, sometimes a year, if at all. So this album is one of those that were immediately available, like many others in my collection.

Nels Cline does not need much introduction anymore : he is the guitarist of the popular Chicago rock band Wilco, but next to that he has already published an extensive list of albums, some with his brother Alex Cline on drums, and one underrated album with Greg Bendian : an ode to John Coltrane's Interstellar Space.

On this album he plays with his band The Nels Cline Singers, although there are no vocals: with Devin Hoff on bass and Scott Amendola on drums. This is a modern jazz guitar trio, with quite some rock influences, and the trio plays it real hard at times. The music is straight-ahead, stripped of all arrangements or studio sophistication, and without falling into the trap of the needlessly long masturbatory guitar soloing of the less mature player. No, this is music with vision, with creative compositions. The CD starts very slowly with the menacing "Caved-in Heart Blues", with soft harmonic guitar strumming only accompanied by the bass drum, half-way the track the acoustic bass joins, then acoustic guitar, and then, from very far out of the depths comes a scorching blues guitar solo, with reverb and chamber buttons fully opened, while the bass plays arco and electronic noises come and go. Guitar trio? Indeed, but with overdub and electronics when needed. But that's about all the melancholy on the album. The second piece starts with chasing, nervous, jazzy guitar, with counter-rhythms from bass and drums. Cline is inventive, surprising and he never falls back in automatisms. The third piece is a real rock song without vocals, but then it fades away to leave the room for an arco bass solo from Hoff, again to be replaced by a burning hard rock solo, for which many a heavy metal fan would take out his air guitar, but Cline wouldn't be Cline if he didn't stop this whole thing abruptly for some soft finger-picking, just to come back full gusto with the whole band. The whole thing is not just hard stuff, there are also some dissonant avant pieces, without rhythm or melody, there is some real fusion, some soft guitar pieces, all genres are thrown in the mix. And they play it all well, smartly and with joy, and more importantly, it all fits their musical concept. Recommended.

i have to point out, though, that wilco is based in chicago, which is not on the west coast. here we call it "midwest," to distinguish it from the "middle east."

Brent, my apologies, I should have double-checked the info. I love Chicago!