If the word "soundscapes" can be used for slow, quiet music, consisting of long passages in which the instruments bring layers of sound rather than rhythm and melody, and where the structure offers a horizontal impression like in a landscape, then the word "soundsculpture" can be used for its more vertical version, with strong changes in intensity, jagged edges, nooks and corners, not many regular or smooth surfaces. If you then apply these two forms to two new postmodern jazz albums with strong electronic approach and heavy post-production and you will have an idea what the two following albums each have to offer. Apart from that the line-up is comparable : guitar, sax, piano, bass, drums. And the piano is twice played by Craig Taborn, and that's definitely no coincidence. 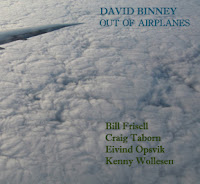 David Binney has already issued some interesting post-modern jazz albums, with quite some influence from rock and even country music, yet these albums were still very close to mainstream jazz. On this one he takes a big step further, with quiet, jazzy, often on rock-harmonies based music. The music is complex and well-crafted, with beautiful, airy and intense melodies. Next to Binney, no one less than Bill Frissell plays the guitar, Eyvind Opsvik on bass (check his solo albums), Kenny Wollesen on drums and of course Craig Taborn on keyboards. Binney takes risks as a composer, leaving lots of space (hence the title probably), melody, harmony and rhythm are present, but they drop away regularly, creating a space which is then filled with long soloing by guitar or sax. Pieces such as "Jan Mayen" are heart-rending, with Frisell and Binney soloing in the high registers of their instruments, howling and wailing. And the same holds true for the title song, which starts with a nice enough melody, to be replaced by only guitar and sax, then the melody comes back with the thumping drums of Wollesen in support. "The Forgotten Gem" is totally soundscape, with the electronics offering a permanent base tone, with light guitar music on top and light drumming below the surface. I never jumped out of an airplane, but if this music comes even close in terms of feeling, then it seems like really worth a try. This is nice, airy, fresh, pretenceless music. The best CD by Binney so far. 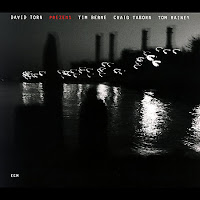 Prezens by David Torn is a totally different ball game. Here you're being sucked into a listening experience like you've probably had very few so far : this is jazz which is played in the studio, then cut to pieces to be reassembled afterwards, minutely with lots of attention to detail. Too many details to absorb even in several listens, because each piece brings constantly new approaches, new rhythms, new sounds, unexpected melodic changes, as if you're walking around a sculpture, seeing the same thing, but from an ever changing different perspective. And the music can be hard. Torn is a fine guitarist, yet I don't think he cares much for the instrument as such, it's sometimes even difficult to distinguish guitar and keyboard, for the level of transformation and electronic distortion. The other musicians are also among the best : Tim Berne on sax, Tom Rainey on drums. The album begins slow and quietly, with plucked guitar and a bluesy organ, with light cymbal work and the high sax of Berne, yet they are the heralds of a raging menace, that suddenly explodes out of Torn's heavily distorted hard rock guitar. Effect is the key word here, and I agree, the trick has been used more than enough, to slow down the music, just to let it explode again, but it still works, at least on this album. Estethically speaking the "Structural Functions of Prezens" is the most beautiful piece of the album, especially because of Berne's stellar sax playing, which we know from his extremely long improvisations, but which is here extremely subdued and beautiful, and remaining so throughout the piece, despite the ever-changing musical background, with amongst others Rainey giving some hard-hitting high energy playing on his drums. "Bulbs" too is full of effects, first with a quiet build-up, then all the instruments fall away, just the guitar plays some plucked chords, which then really (again) explodes in a piece of mad feedback-driven guitar-screaming the likes of which I haven't heard since Hendrix. Effect? You bet! This is music full of tricks, full of chaos, full of electronics, full of sampling, full of intensity, full of suprises, full of pretence, lots of pretence, but Torn offers a voyage which promises to be one of the most unique musical experiences of the year. Forget about your musical preferences for a moment : close your eyes and enjoy the ride!

Just a quick reminder that you forgot to mention the fourth member of the group - Craig Taborn (kybds).

Keep up the great work and all the best - Joe