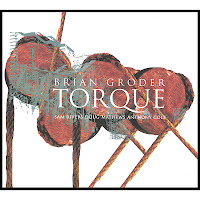 It takes courage to do this, asking the Sam Rivers Trio to bring out a CD together, and it sounds a little bit like you're asking to become the fifth wheel on a car. For those who don't know : Sam Rivers has played all kinds of jazz in his 83-year long life, but has especially brightened the free jazz and avant-garde subgenres with his powerful tenor for many decades. And yes, Brian Groder managed to create a jewel of an album with Sam Rivers and his rhythm section : Doug Mathews on bass and Anthony Cole on drums. Brian Groder is a New York trumpet and flugelhorn player who makes music here like he's been touring with the band for many years, yet even more importantly, he also manages to create a common language which holds the middle between free, avant-garde and bop. With the exception of the rare unisono themes between sax and trumpet, this album consists of a very melodious discovery of interplay and sound color, with lots of space for improvization. The album consists of pieces with the full band, but also of duets, starting with Cole ("Spellcast"), with Rivers alone (on flute "Behind The Shadows", or sax "Camouflage"), and of course also with the bass ("Iota", "Jingo"). The album ends with a duet of trumpet and drums. And regardless of the line-up changes, the music is absolutely fantastic, and will entrance both freejazzers and mainstreamers alike, by the absolute musical freedom, openness and vision on the one hand, and because of the accessible sensitivity, and the melodic and rhythmic feeling on the other. Groder is obviously the musical center of the album, yet the intensity and depth that is brought here should be credited to the whole band. And probably the most stunning aspect of it all is that Sam Rivers goes along with Groder throughout, as if he's become the alter ego of the trumpeter, but then on sax. The veteran's skills, empathy and musical understanding are astonishing. Everything on this album is a success. A real must!

It's so great that you recognized Mr. Groder's talents. His full catalog can be found on his website, Brian Groder, along with videos and free downloads. He's amazing!