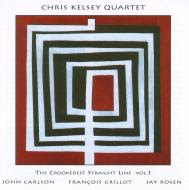 It seems to become a fashion again in free jazz circles to play inside-out, starting with tightly composed themes which refer back to the roots of jazz, but then only just to serve as the base camp for more adventurous free explorations. Soprano sax player Chris Kelsey uses this approach here with his fine quartet, which also includes John Carlson on trumpet and flugelhorn, François Grillot on bass and Jay Rosen on drums. The first track "Post Modern Time" is a great piece of free bop, with walking bass and all, and full of energy, to be followed by the beautiful "Poor Relations", a more abstract, slower piece, that evolves rather freely, with alternating solos by the two horn-players ending in a long unisono theme. The next piece also starts unisono in the same vein of musical color with a relatively complex theme and ditto rhythm, which lays the foundation for again great solo work. "Fangle" starts boppish, with sudden tempo and rhythm changes, reminiscent of Ornette Coleman, and then John Carlson tears away on his trumpet, a pleasure to hear, above an uptempo high intensity drumming by Rosen whom we seldom hear in this role, hard and energetic yet with his usual precise accentuating, opening space for a scorching solo by Kelsey, all the while being propulsed further forward by the rhythm section. Then suddenly, above all this intense powerplay, Carlson starts playing a slow, soft, almost romantic solo, and he brings this machine from hell to a grinding halt, and bridged by some light drumming, back to the main theme. And that's the nice thing about this band : the four musicians are a perfect fit, playing in support of one another, with focused soloing, managing to create a common musical color. The beautiful "Ask I Won't Tell" starts in a structured manner, with a lightly dancing melody brought by the sax and with the trumpet echoing the theme, paving the way for a powerful solo by Kelsey. Both horn-players are excellent, and it's not surprising that Kelsey asked Carlson to join his band, since both players have a warm tone, a melodic and structured approach which they combine with creative and abstract tone-setting, and this track illustrates this very well. As Kelsey says it himself, this is probably his most accessible album so far : "Maybe, although it's a wildly relative judgment. Kenny G (or even Branford Marsalis) this ain't. It simply is what it is. I dig it, and hope you do, as well." We certainly do.
Stef on Tuesday, July 31, 2007
Share