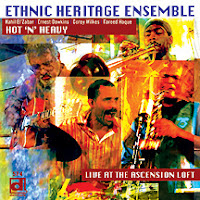 Percussionist Kahil El'Zabar has two bands with which he releases new albums with the regularity of a clock : the Ritual Trio and the Ethnic Heritage Ensemble, the latter most often a quartet. There aren't any major differences between both bands, neither musically, nor in terms of overall feeling and effect, apart from the line-up which offers a different coloring to the music. The music is strongly based in rhythms, with a fixed, contagious groove, that is maintained throughout the track, which offers the soloists ample space on their spiritual quest, built around beautiful, often long melodic lines. Atmosphere, enthusiasm, mutual encouragement and interaction between the players are all central to the concept of the band, sometimes exuberant, sometimes subdued, yet always very rhythmical and with lots of space. The major difference between both bands is the line-up : the Ritual Trio consists of percussion, bass and sax, while the Ethnic Heritage Ensemble is composed of percussion, the trombone of Joe Bowie, the sax of Ed Wilkerson or - like here - Ernest Dawkins, once every so often joined by Fareed Haque on guitar. And the repertoire is absolutely identical : El'Zabar classics such as "Ka-Real", "Ornette", "Love Outside Of Dreams", "Ancestral Song", "Alika Rising", "Papa's Bounce", etc. can be found on several records by both bands. And who cares? Only this album brings a totally new song list. And Joseph Bowie on trombone is replaced by Corey Wilkes on trumpet and flugelhorn (even played at the same time!). Quite some changes at first sight, but that does not apply to the music. The compositions keep their rhythmic base, the melodies are beautiful, the structure and arrangements simple, the percussion absolutely fabulous and the joy of playing of the musicians is a treat for the ear. And the music is at its best when performed live, in a small setting, intimistic and close. And the audience reacts like it does here : spontaneous, enthusiastic, part of the performance. The musicians give an excellent reading of El'Zabar's compositions : Corey Wilkes is really strong, Dawkins composed, with a warm bluesy tone, Haque gives the necessary harmonic support and soloes well, and El'Zabar himself is unequalled on hand percussion, and as well on his signature instrument, the thumb piano. This is mainstream jazz in its free-est form, or free jazz in its most melodic and rhythmic variation, but I don't think El'Zabar cares about these distinctions, as long as the music sounds well, creates space and spiritual feeling. And it does that for sure, and it offers joy on top. Recommended.

There is also a DVD of this performance, to be bought separately.