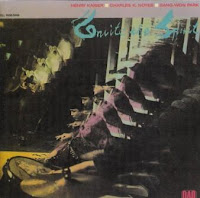 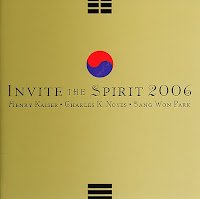 Henry Kaiser is hard to pigeon-hole: rock guitarist, jazz guitarist, experimental guitarist, but on these albums he goes zen with San Won Park on kayagum, a Korean 12-string zither, and with Charles K. Noyes on percussion. I know nothing about Asian music, and to be honest I have to admit that I thoroughly dislike Chinese music and the Japanese music you sometimes hear in movies. I can hence impossibly assess for each track whether this music is authentic or experimental all the way. Ok, you can hear the electric guitar, often distorted, but what San Won Park plays sounds often more experimental than what Kaiser does. Whatever it may be, this music is beautiful, and has the effect of Japanese drawings : a few precise pen-strokes on a white sheet say more than a page full of lines and colors without refinement. Less is more. And indeed, this music is nothing more than strings being plucked, with lots of space in between, once in a while with a light touch of melody, but never fully developed (don't expect to be whistling along after a while). At times utterly bizar, you will also have to get used to the singing, but once you're "in" the music, this is something to be enjoyed. The first album dates from 1983 (Celluloid), and now Invite The Spirit 2006 is out on Tzadik.
Stef on Wednesday, July 04, 2007
Share