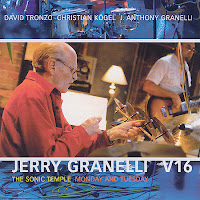 I don't quite know how to describe the music of Jerry Granelli's V 16. Free rock seems to be the best description. The line-up itself is already atypical for jazz : two electric guitars, electric bass and drums. Father Jerry plays drums, son J. Anthony plays bass, Christian Kögel and David Tronzo play guitar, and with the exception of son J.A. this is the same band as the V16 Project of some years ago, an album which was slightly more interesting than this one.

David Tronzo is probably the best known musician on this album, because of his collaborations with Sex Mob, the Lounge Lizards, Slow Poke and Michael Blake. This double album brings two live versions of the same set, recorded on two consecutive days. The songs and the sequence are identical on both discs. This is interesting for those interested in identifying the differences between prepared parts and improvization. The music is not earth-shocking, but quiet, spacy, creative improv bringing an interesting new sound to modern jazz. The best song is "Old Neighborhood", and kudos to 67-year old Jerry for his self-effacing yet effective presence on the album. Even "It's A Man's World" is on the album, in a more than enjoyable version. But the whole is a little bit to nice to my taste.

The CD can be downloaded via http://www.emusic.com/.

Riddim
Rock Thong
This Is A Man's World
The Ballad Of El Leo Nora
Stef on Tuesday, July 03, 2007
Share