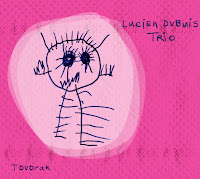 This sax trio led by Swiss reedman Lucien Dubuis funks and rocks from beginning to end, without stopping, without halting, playing as if their life depended on it. The music is very rock-influenced, close to the best pieces of other sax trios such as The Happy Apple or the Belgian band Slang. Dubuis' playing is strong, and often reminded me of Ken Vandermark. And that's a great compliment. He is one of the top young European musicians, having played with the European Young Jazz Orchestra, and for this trio he is accompanied by Roman Nowka on bass and guitar, and Lionel Friedl on drums, objects and dance (?). The tracks are short, 14 for the whole album, yet their compactness is part of their strength. Yes, there is soloing on this album, and even great soloing, but the real power is in those beats and the sustained intense energy emanating from this trio. They describe themselves as "Imagine a chromosomic mingling of a touch of John Coltrane genes and the DNA of the Beastie Boys: the Crossover Jazz Trio just enjoys playing the jazz stuff, just as Madonna would enjoy sex after a year in jail, with lust !"

That sounds pretty clear, and it is actually a pretty good description of their music. However, what this album is all about, remains a mystery, even with the explanation given : "Tovorak, the monster with spines, learned the fabulous techniques of the Sumo for many years and is now back to save the world. But can he resist the indecent and hysterical offers of Samantha, Britney, Lorie, Kent and Falbala ? Will he be able to transcend his own weakness and see his quest of a phantasmagorical paradise through?"

Never mind the explanations, this is great music, adding some new twists to free jazz, and it is fun too. Worth looking for!

Listen to some sound samples :