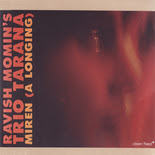 Percussionist Ravish Momin comes with a new Tarana Trio : Jason Kao Hwang has been replaced on violin by viool Sam Bardfeld, and Brandon Terzic replaces Shanir Ezra Blumenkranz on oud. This change gives the music a totally different color, despite the fact that the same instruments are used. Just like on "Climbing The Banyan Tree", the rhythms and rhythm changes are at the center of gravitation, but just a notch more intense than before. Momin's approach to music is hard to define, world music influences dominate, and then especially Indian rhythms and Middle-Eastern sound flavors, yet sometimes the melody lines are closer to European folk, but the real power of this music are the long improvizations which are definitely jazz-oriented. Bardfeld's violin sounds less abstract, less varied than what Hwang brought, but it's a little more hypnotic, basically because he's not afraid to bring repetitive themes, in which he approaches the same notes with a different intensity, and that doesn't miss its effect on the listener. The oud is also more prominent, because for Blumenkranz bass was his first instrument, and the oud was only used sporadically. And Terzic is good, even if it sounds at times ungrateful to play an instrument with limited natural volume against the hard driving drumkit, like in the title piece. The oud really shines when it can play solo, like at the intro of "What Reward" or when it's just accompanied by light percussion as on "Tehra" or "Fiza". This is a great CD, with strong emotional power and tension, and one that is easy to recommend to anyone interested in the combination of free jazz and world music.