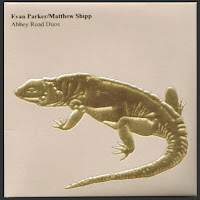 When two of modern jazz most prominent innovators join forces, expectations run high, and Matthew Shipp and Evan Parker certainly deliver the goods. The second great piano and sax record in a month (the other one is by Ehrlich and Melford), but of a totally different nature and approach. Shipp and Parker move to very abstract, fragile territory, demonstrating what joint improvization can mean for two absolute masters. The album is divided into two suites : a tenor suite and a soprano suite, and on each they create open environments with lots of space, offering room for the other player to join in, to accentuate, to echo, to contrast, yet at other times their interaction so immediate and coherent, that you would think it was composed. The tenor suite starts in a dark, brooding way, moving to a higher level of intensity on the second piece, exploratory and playful on the third, and becomes fully abstract and anguished on the fourth. The soprano suite starts in a peaceful, airy way, with Parker demonstrating his circular breathing skills, creating an almost monotonous sound over Shipp's sparse notes and occasional string-plucking, then moving into a melodious yet melodyless improvization with lots of silence : tender, fragile, subdued. The second piece becomes more agitated, with short bursts of sound and rapid-fire conversational interchange, just to slow down again in the third piece for a digression into soft emotional tonal explorations on the sax, accompanied by eery piano arpeggios. The album ends with more abstract free forms. These two musicians' musical vision and coherence in the execution is truly amazing. Let's hope they will find much more opportunities to continue with this duo format. It's without a doubt among the best fully improvized CDs of the year, creating music which might even appeal to a broader jazz audience.
Stef on Saturday, September 22, 2007
Share

Your reviews are always very informative and well written. Thanks!

Hi there. Just found your blog while looking for reviews for this album. It looks like you post a lot of interesting and valuable information. I'll be subscribing!