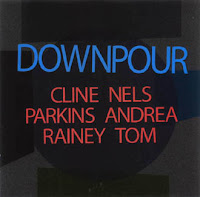 Some years after their first album "Ash And Tabula", this avant-garde trio consisting of Nels Cline (guitar), Andrea Parkins (electronics, accordion, piano) and Tom Rainey (drums) brings a new exploration of hard sonic universes. The record requires some effort at first, but the more you've listened to it, the more astonishing it sounds. Andrea Parkins is responsible for the major part of the sonic explorations, with Nels Cline reacting to it and Tom Rainey accentuating and chasing the whole thing forward. This music is impossible to classify. This is no jazz, no rock, no free improv, but a new style which integrates the three genres. You may be able to find sound samples of this album on the internet, but 30 second pieces cannot possibly give an inkling of how this music evolves over these two long and one short track. The music pulls you into a place you've never been before, where sometimes, but very rarely, you can hear sounds that are familiar (some guitar strumming, drums, even a few undistorted piano notes, ...) but more often you will be surprised by sonic openings into a new spacial environment, with new tonal combinations, intense, electrifying, scary, gloomy, dark, menacing. The three musicians are incredibly strong, creating this musical universe as free improv with an incredible coherence and variation. Tom Rainey is without a doubt one of the best modern jazz drummers of the moment, and every album he contributed to in the last few years is excellent (Torn, Malaby, Berne, Helias, Shepik, O'Leary, Feldman), and that is no coincidence, because his drumming is so determining for the whole sound. And although Andrea Parkins is not so prominent on the foreground here, her sonic explorations are extremely functional and set the mood for the whole record. Nels Cline is again a master in harsh creativity, developing new sounds, sometimes guitar-like, yet more often totally unfamiliar sounds, and his playing is creative and subtle throughout both the calmer and the harder moments. He is someone like Robert Fripp who can create new music just due to his unbelievable mastery of his instrument. This record is a real adventure, full of power, energy and subtlety. Don't miss it.
Stef on Saturday, September 01, 2007
Share

This was recorded at the Festival de Musique Actuelle de Victoriaville in 2006.

Victo is located about an hour and a half from where I live and I confess to have never attended.

I really should make an effort, considering the very talented musicians performing there. ;-)