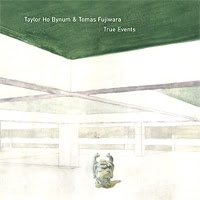 Regular visitors of this blog will know that I like Don Cherry and that I favor small ensembles that improvize freely. And that almost sums up why I did not like Taylor Ho Bynum's "The Middle Picture" that much, while I really enjoy "True Events". Both were released this year, but are incomparable : the former was a very orchestral affair with too much ambition, too much variation, which did not manage to create a real unity of style, a problem which is of course easier to avoid in a smaller trumpet-drums setting. And that is beyond a doubt the real power of this album : both musicians not only share a broad and excellent technique, they've also known each other for over 15 years and that entails an interactive power that is a real treat to hear. Most tracks are short, very short even, with a minimal sketchy melodic and rhythmic structure. That aspect is the nice part of this music : it's poetic rather than epic, compact and eloquent in its expressive power, rather than needing a long story to come across. Only one of the tracks is completely improvized "The Emperor Of Ice Creams", which lasts almost 15 minutes, but which offers a great extension from the poetic parts to a more conversational dialogue between the two instruments. Great music.