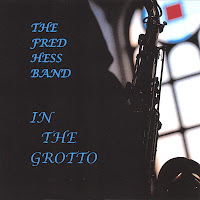 Fred Hess is one of those artists who managed to carve out their own style and characteristic voice within jazz. His albums are carefully composed but keep the lightness and freedom of free jazz. The compositions themselves are always creative, with lots of twists and turns, tempo changes, rhythm changes, new themes coming in, moods shifting, and it's hard not be kept captivated by what's going on : you get surprises and new vistas after every new bend in the road. Hess is also totally underrated as a musician : his sax playing is very rich and varied. He is accompanied by a great band consisting of Ron Miles on trumpet, John Gunther on alto saxophone, Ken Filiano on bass and Matt Wilson on drums. The great thing about Hess's music is that he incorporates the whole of jazz history in his writing, from bop to more abstract modern work, but also funk and third stream. And the band is technically so good, that they move his compositions to an even higher level. Probably his greatest feat is that he infuses his intellectually challenging compositions with fun, and that's obvious from the very first funky tones of the opening track "Simple Steps" and it doesn't stop till the final notes of the more boppish stop-and-go fun of "Ninth House".