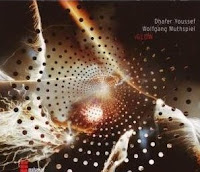 Tunesian singer and oud player Dhafer Youssef has always been a musician to my heart, in the sense that he managed to create his own voice in contemporary music, in a creative and intelligent way. So far, Malak was in my eyes his best album, with Nguyen Le on guitar and Markus Stockhausen on trumpet. Here he is joined again by Wolfgang Muthspiel, as on "Electric Sufi". The whole CD is a little more introvert, and yes, Youssef's singing is still amazingly great and absolutely rare in its absolute power and range, but it's becoming a gimmick. His former albums, Digital Prophecy, was already less spectacular, but this one is even a little bland at moments. It's not bad at all, but it's not terrific either. There isn't enough musical expansion, his oud-playing is completely pushed to the background, and although Muthspiel is an excellent guitar player, the whole CD remains within a riskless zone, probably trying to appeal to more tastes. And that's never a good strategy.