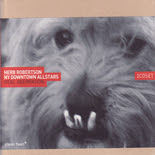 I am not a fan of Herb Robertson. Despite the many good reviews some of his previews albums received, I never really got "into" it, finding his music to tight, too cold, too experimental, too abstract, not all of this qualifiers necessarily at the same time, but I almost always found something lacking, regardless of the excellent musicianship, and the great musicians who accompany him. Not so, however, with this album. This is the second release with the NY Allstars, consisting of Herb Robertson on trumpet, Mark Dresser on bass, Sylvie Courvoisier on piano, Tim Berne on sax, and Tom Rainey on drums. The first one "Elaboration" offered one long piece which had its good moments. But on this one "Real Aberration" (a pun on Re-Elaboration), they push the concept further but in a more gentle, calmer, more restrained way. The music is intense throughout, as on the previous albums, but the music is less dense, less crowded, more spacious, allowing for more room for the individual musicians to explore and hence to add color, shades, emotional and improvizational changes, and for the music to expand, to become more free and lighter. It is indeed rare to have all musicians play at the same time, even though the two disc set just consists of two lenghty suites, more often than not there are one, two or three musicians playing, one dropping off, another joining in, and in doing so creating interesting shifts and an effect of waves of music succeeding each other. The idea to have a two disc set was indeed a good one, because it allows for some brilliant moments, as for instance on Mark Dresser's bass solo on the opening track, on which he poignantly demonstrates the variety of moods and sounds his instrument can produce, lightly supported by Rainey, pushing his arco into an endless tone, the perfect door through which the piano and the horns can make their entry for the next piece, where Rainey is leading the dance, on the third piece, the trumpet, sax and piano engage into some excited trialogue, and it is only on "Part 4" that the whole band seriously starts its group improv. The two suites are not totally free improvizations, some structural elements and themes have clearly been prepared in advance, and those anchor the overall freedom in limited but welcome moments of reference. It seems to me that Robertson's concept of opening up the structure of his music, unleashes its emotional power better and allows for the music to really shine, and suprise ... The title "Real Liberation" would have been closer to the truth.

(PS - the hideous dog on the cover should not deter you : it's by far the ugliest part of the whole album).