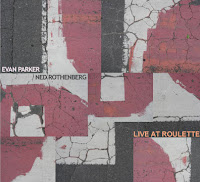 Back to some serious stuff now - though with moments of great fun too. The album brings one hour of free improvization between some of the best improvisers on sax and clarinet. We know of each of those two musicians what their capabilities are, but when they join forces, the effects are absolutely astounding. Don't expect swing or strong rhythmic expansion, but what you get instead is so much stronger : two virtuosi playing with sound, with melody, interacting, respectfully, joyfully, intimately, creatively. When one of them changes direction, the other one follows, copying, echoing, then playing the freshly created phrase together, then moving away again, and this in all possible variations. There are rhythmic parts in it, especially when Rothenberg or Parker move to passages of circular breathing, with deep-toned repeated patterns, allowing the other one to soar freely above them, or in high flustering tones, one against the other in counterpoint, spinning like dancing Dervishes, until your head starts spinning too. But they can play up against each other in moments of great intensity and raw virile outbursts, like roosters fighting, as in "On Alto On Tenor". The overall effects are beautiful, strange at times, hypnotic, captivating.

I haven't heard their previous duo album "Monkey Puzzle" (Leo Records, 2000), but if it's half as good as this one, it's still worth looking for.

The video below gives a good picture of their unbelievable skills.