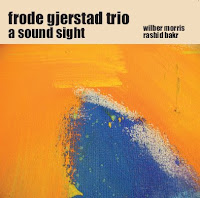 Frode Gjerstad is one of the leading sax players in Norway, fond of the trio or quartet format, and always in for the long haul, with tracks as long as one hour (on "Ultima"). On this album, with Wilber Morris on bass and Rashid Bakr on drums, there are three tracks, two close to 30 minutes and one of 5 minutes. Gjerstad is someone who needs time to bring his music to its full potential, not in the sense of Coltrane, who needed time to create magnificent expansive broad visions, but rather in a nervous, in-the-moment kind of way, knitting close notes around the center of his tune, focusing on the raw intensity of the music. Halfway the first track, the energetic power diminishes, for some slow but creative interaction with Morris on arco. The short middle track brings an interesting sensitive mutual exploration, but with Wilber Morris leading the music. The third piece goes on in the same vein, but not for long, because the energy and the nervousness start building up again, with an impressive Rashid Bakr, pushing the other players forward, and again, as in the first piece, about halfway the track, the whole thing collapses again into itself, and Morris starts playing arco with Gjerstad producing hesitant, plaintive sounds over the bass, resulting in some of the finest moments on the album. It's good that Ayler released this live performance from 1997 on CD, and it's nice addition for those interested in Gjerstad's music. For those who don't know him, I would recommend to listen to "Through The Woods" or "The Other Side" first.

You can download from Ayler records, but also from iTunes and Allaboutjazz.
Stef on Sunday, December 09, 2007
Share

One of my favorite releases of the year ; recommended !