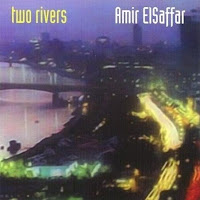 Lots of world jazz tends to do some work on the surface, superficially blending atmospheres and styles, but luckily once in while a musician manages to delve deep into the music itself, identifying the essence of several musical languages and forms, and truly bringing them together to create a new voice. This album definitely belongs to the second category. Amir ElSaffar, a US-based trumpeter, but born and raised in Iraq, creates his own style, based on the Arabic maqam style, with traditional instrumentation and vocals, but adding the expressive power of jazz instruments and the nervous enthusiasm of jazz itself, with both genres running together or transitioning smoothly into each other to create a coherent whole. This is probably the most successful blend of the genres, next to Rabih Abou-Khalil, that I've come across. As I said earlier, few genres apart from jazz are sufficiently open to integrate other influences without creating musical conflicts. The band consists of Amir ElSaffar on santoor, vocals, trumpet; Rudresh Mahanthappa on alto saxophone; Zafer Tawil on violin, oud, dumbek; Tareq Abboushi on buzuk, frame drum; Carlo DeRosa on bass, and Nasheet Waits on drums. With those musicians, you can go a long way, but El Saffar's trumpet playing is also excellent. He manages to replicate the long deep yearning and plaintive phrases that are so typical for Arabic singing into his trumpet-playing, including the microtonals and rhythmic complexities. To his credit, he often sticks very close to the traditional form, singing beautifully and full of deep-felt emotions, but these parts shift easily into intense interplay with the rest of the band, with long unisono lines, moving into improvizations which are either jazz or middle-eastern, yet perfectly comfortable with one another. Mahanthappa's sax-playing also fits perfectly with this music, as he is also a master in working on the tonal shades of his instrument. Great music, great band. Not to be missed!

The CD can be downloaded from iTunes.
Stef on Thursday, January 17, 2008
Share