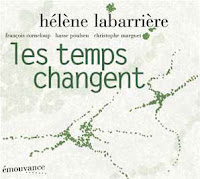 Creating musical tension is not an easy task : you need to work on a sense of anticipation from the listener, who enjoys the surprises and contradictions he or she is confronted with, wanting to hear more of it, anxious about how the music is going to evolve, eager to know where it's going to end. And tension is exactly one of the major qualities of the second album by French bass-player Hélène Labarrière. The very first tones of "Soizig", the first track, already suck the listener into this feeling : brushed drum-playing, with rhythmic but asymmetric bass-playing is spiced with eery metallic sounds by guitar and sax. Tension is built, with little flourishes of relief, but not yielding everything. Labarrière is joined by François Corneloup on baritone sax, Hasse Poulsen on guitar and Christophe Marguet on drums. The contradiction is to be found in the tension between the incredible sense of rhythm, often repetitive and hypnotic, over which odd and often abstract unisono melodies are played, making the music inviting yet unfamiliar, forming the basis for controlled improvizations. The four band members are absolutely excellent in the overall unity of style the record brings, switching between soft loaded passages and fierce intense moments with screeching guitar and whailing baritone sax. Corneloup is a great baritone sax player as I mentioned earlier and Hasse Poulsen uses lots of extended techniques on his guitar and litterally with great effect. The only track which does not really quite fit is "Good Boy", bringing a folky melody on the acoustic guitar, a little bit too joyous for the dark mood and complex elaborations on the rest of the album. The title ("times are changing") not only refers to the time in between sounds (rhythmic definition), but also to the fact that because times are changing so fast (real life definition), we should not be deaf to the world and listen carefully, but above all, we should have a sense of urgency in what we have to say and play even more lively. That is what Hélène Labarrière writes about her own music. Let's hope that she walks the talk and doesn't wait another ten years for her next album.