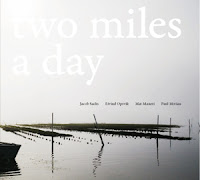 Two young and talented musicians, pianist Jacob Sacks and bassist Eivind Opsvik talk about with whom of all the living jazz greats, they would like to play, and the unanimous answer is Paul Motian. And lo-and-behold, a while later they are locked up in a studio with the master, joined by Mat Maneri on violin and viola, and six hours later this recording has become a reality. And the speed clearly had a positive effect on the end result. On 11 tracks the four musicians bring out the best they can in terms of intensive playing, mining their respective and common musical idioms, from bop over latin influences to more abstract and free pieces. Some of the tracks had been composed before by Sacks and Opsvik, but not all. The title track is one of my favorites on this album, because it exemplifies Motian's concept of implicit rhythm, playing around it, accentuating it, rather than emphasizing it. And the other musician's follow suit, which makes the music the equivalent of an impressionist painting, shades and coloring which still draw a picture, but leaning toward the abstract. But other tracks are closer to mainstream, melodic, rhythmic and accessible, with Maneri's odd microtonal viola adding subtle emotional touches and out-of-this-world sounds. Light, deep, open-minded and rich music by four excellent and inspired musicians.

Listen to or buy from CDBaby.