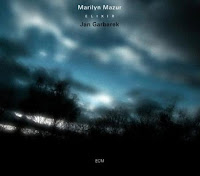 Danish master percussionist Marilyn Mazur and Norwegian saxophonist Jan Garbarek join forces for this beautiful album. Mazur has been the percussionist on many Garbarek albums, but here it's clear that she holds the reins. Many of the 21 tracks are percussion only, with interesting rhythms, lots of attention to sound and even more to balanced compositional precision. Mazur's approach is almost zen-like, offering clear and accurate touches, with every percussive hit of one of her many drums, cymbals, bells, ... asking for individual attention. This minimalistic approach is of course perfectly suited for Garbarek's clear and spacy playing. Some pieces are entirely spiritual in nature, such as "Mountain Breath", on which Garbarek plays flute and Mazur's handling of her cymbals gives an electronic-sounding effect, yet most of the tracks are more tribal, folkloric, drawing upon some deep feelings of belonging, in sync with the flow of nature, not in a detached way, but with soul. I used to be a fan of Garbarek - decades ago - then I lost interest in him because his ice-cold, often rhythm-less playing no longer touched me, but here, I think Marilyn Mazur managed to give him back his soul - listen to "Totem Dance" as an example of this. And that she manages to do this with the limitations of percussion instruments only, is a major feat in itself. And that she manages to create captivating music with percussion only, is even more impressive. Highly recommended.
Stef on Friday, January 18, 2008
Share

Stef, I second your feelings about Jan Garbarek - especially his constant playing in the upper registers of his soprano. Ouch! I reconciled Jan after his release of In Praise of Dreams with violist Kim Kashkashian and drummer Manu Katché - especially for his return to the tenor. As you like Elixir I'm pretty sure that you'll also like In Praise of Dreams. Give it a try.