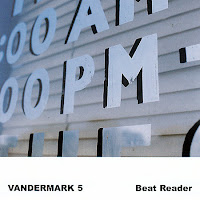 Cellist Fred Lonberg-Holm sure adds some spice and change of perspective to the Vandermark 5, a free jazz band with stong roots in the tradition and characterized by Vandermark's broad, soulful and often funky soloing. Those characteristics are still here, but the quintet moves more into avant and free improv territory, with touches of chamber jazz, prog rock and even Hendrix-like sounds, not from a guitar, but from the cello! Variation galore with lots of unexpected twists and turns. Listen to "Signposts", on which both Lonberg-Holm on cello and Kent Kessler on bass create an nervous background frenzy with their bows, while Vandermark and Rempis play slow contained melancholy notes over the madness of the strings, then Tim Daisy breaks the thing open into a high tempo drums duo with the bass clarinet, and then when you think the whole thing will move into a free-bopper, the piece collapses into some slow playing, then picking up speed again with the clarinet going crazy, one beat by Rempis and the whole thing stops for the arco bass to play some chamberlike tune moving into cacophony when the cello and all the other instruments join, suddenly and unexpectedly ending with unisono rhythmic beats by the whole band. "Speedplay" is wonderful free bop, high tempo, high energy, great fun, ending in a few minutes by the cello emulating Hendrix. Not one track has a unity of style or approach, but is broken down in many pieces without loosing coherence. This is probably one of Vandermark's strongest compositional strengths : to structure carefully with strong melodic lines (listen to the beauty of "Any Given Number"), while leaving freedom to act, to integrate many things while creating something new, and all this while maintaing the band's phenomenal drive. It's fierce, it's tender, it's hypnotic. A captivating, surprising, intense album.