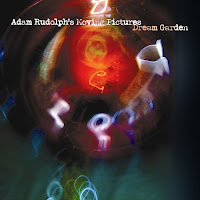 Adam Rudolph is a musician with a variety of tastes and I do not like some of the stuff he does, like with Hu Vibrational, but some of it I find magnificent, as is his CD "Spirits" with Pharoah Sanders and Hamid Drake, or his "Compassion", with Wadada Leo Smith. His Moving Pictures band is a little bigger than the other line-ups he's recorded with, and the result is excellent. Apart from Rudolph himself, who plays as usual a large variety of percussion instruments from around the world, the band consists of Brahim Fribgane on oud and tarija, Graham Haynes on cornet and flugelhorn, Hamid Drake on drums and frame drum, Kenny Wessel on guitar, Ned Rothenberg on shakuhachi, bass clarinet, bass flute and alto sax, Shanir Blumenkrantz on acoustic bass and sintir, and finally Steve Gorn on bansuri, clarinet, Pakistani oboe. Despite the size of the band, the music is as light as it can get, with rhythmic complexities and melodic power, but never heavy-handed, and never insubstantial as lots of world music or new agey material. There is spirituality here, but there is first and foremost music to be heard. And the music is excellent. Consisting of fourteen relatively short tracks, the band, in various formats, creates accessible, light-hearted and free music. Rhythm plays of course a key role, yet mostly as a foundation for the melodies and the improvizations. Some tracks, like the 2-minute "Mysteries" are little gems of free improvization, as is the title track too. Other pieces are composed, like "Helix", the longest piece, on which a nervous percussion acts as backdrop for the improvizations, with the horns playing a great and slow unisono theme at precise intervals. The last track is so absolutely fun, full of African polyrhythms and musical joy in the improvs, that it alone justifies the purchase of the album. Yet the major feat of the whole record, is the coherence of the sound and approach, despite the variation in the music. This music is so deep, so real, so eclectic, that by itself it defines what the term world jazz means. It is jazz, but with influences from all over the world.