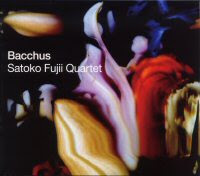 Pianist Satoko Fujii is not only one of the most prolific jazz musicians, her music is always of an extremely high level, often completely different than the previous record, depending on the musicians she is playing with. Her Satoko Fujii Quartet, with Natsuki Tamura on trumpet, Takeharu Hayakawa on bass and Tatsuya Yoshida on drums brings more composed avant-free-fusion jazz with mainstream elements. Don't mistake her Quartet with the Satoko Fujii Four, also with Tamura on trumpet, but then with Jim Black on drums and Mark Dresser on bass. The Quartet has so far only released CD's with titles referring to ancient Greek gods and goddesses. This time "Bacchus", the god of wine, pleasure, but also of madness (perfectly illustrated in the title song), gets the honor. The music here can best be described as an unbelievable amalgam of styles and influences, brought together in carefully crafted pieces, in which anything is possible : changes in rhythm, melody, tempo, mood, style and genre, and not once, but several times, and not only slight changes, sometimes even radical changes. The piano can dance like a Mozart piece, the drums can rock like heavy metal and the electric bass can slap like Jaco, while the trumpet is in the most avant-garde areas, or vice versa and the other way round. The musicianship of all four players is virtuosic, the compositions extraordinary and unique. But the ultimate thing that seems to drive this high energy music is the creation of new musical forms, to explore possibilities, to enjoy the juxtaposition of hitherto untried style elements, the absolute fun of throwing the whole thing around and take the listener by surprise. Musical effects in their purest form are sought and brought, full of drama, full of tension, often dark, often daring, not avoiding musical complexities and difficulties, but actually seeking them out, just to play them with the most accurate instrumental precision, and all that with the greatest respect for melody and rhythm. Sure, this is not free jazz, or fusion or whatever, there just is no name for this deliberately different genre. You can listen to the tracks again and again and again, and there's always something new to be found. There aren't many musicians of her creative calibre around. The music itself is a little too composed for me to get the full five stars, just because I prefer (her) music in a more free context, but that's a very personal appreciation. By all objective standards, this is a great album.

Buy by e-mail via her website. (and the CD gets delivered relatively fast).
Stef on Thursday, February 21, 2008
Share